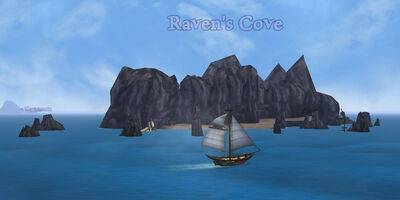 Below are the soundtracks that are played while on Raven's Cove.

"Shrouded in fog, Raven's Cove is an ancient outpost of sand, mystery, and danger. Hidden from human eyes until now and home to El Patron's Lost Weapons - Raven's Cove houses the most powerful stockpile of weapons ever known!

Jolly Roger wanted these weapons badly... so did the EITC Commander, Lord Cutler Beckett. But Beckett double-crossed Jolly to get the weapons for himself. When Jolly Roger found out, he vowed revenge. Their forces met on Raven's Cove and fought ferociously.. Witnessing the epic battle was the Marceline Guild. They watched the formidable foes fight for two days - ending in a draw, but leaving the island in shambles. Both sides walked away with a hefty share of the enchanted weapons. Now they can be found all over the Caribbean, carried by EITC forces, the Undead, and some were even sold to the Navy. Defeating your enemies is the fastest way to get your hands on these powerful weapons. But the question remains - what's the fate of Raven's Cove? Can it recover from such devastation?"

"Not long ago this cursed isle was pillaged by Jolly Roger's evil forces and the East India Trading Company. Now you'll find it inhabited by a strange mix of ghosts – from hostile to serene – and all souls in between. The aggressive ones manifest only at night unleashing their wrath, while the meek ones seek your help in setting wrongs right. Surrounded by ravens, this ghastly isle holds many secrets for Pirates seeking adventure."

Island of Danger and Misery

Raven's Cove is a far-flung, desolate location in the western Caribbean. It was settled some years ago during the time of the first Conquistadors, but its existence remained a mystery for a long time after. However, rumors that the small settlement was actually the final resting place of El Patron and possibly his cache of treasure and weapons soon led forces of the East India Trading Company and Royal Navy to search for the elusive spot of land.

Many Pirates tried to stop these fleets, but they were no match for their massive firepower. However, Jolly Roger, wanted these weapons too for his own conquest efforts. He sent many Skeleton Warships to find the island. The EITC and the Undead arrived at nearly the same time. A huge battle took place which lasted over three days! When the dust settled, they both left with half of the share of El Patron's Lost Weapons.

In their wake of destruction, the island itself was left in shambles and its small population completely wiped out - except for one lone man, who went insane.

Pirates may also come here to complete a special task for Captain Jack Sparrow as part of its own story quest, but only pirates with Notoriety of 30 or higher can undertake this challenge. Pirates who have not performed the quest can still roam the island, but the inhabitants will not interact with them. 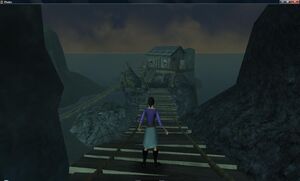 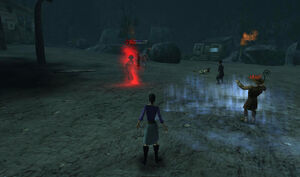 After El Patron disappeared, the citizens of Padres del Fuego moved his large cache of weapons away from their homes. This move was apparently done in secret as all rumors of the weapons never mentioned the relocation to the hidden isle. El Patron and his crew had previously set up the Cove as the base camp for his conquests in the Caribbean on behalf of Spain. The villagers were tormented and forced to work for long hours in the mines. They cursed the swords they were forced to work on with their anger, and created several Cursed Blades, with incredibly powerful abilities, which were later lost. El Patron used some of these blades in many of his major battles. The crew of El Patron however were not loyal to the end. They mutinied against him and locked him, along with his ship into a chamber within the breach of the mines. The loyalists of his crew and many of his powerful weapons were trapped along with him.

Many hundreds of years later, the word of these weapons spread slowly among explorers, privateers and pirates. The East India Trading Company's chairman Lord Cutler Beckett as well as the undead captain Jolly Roger thirsted for the Lost Weapons of El Patron. Expedition Fleets were sent by the Company to capture control of Raven's Cove, which housed the weapons. Pirates led by the Marceline Guild rebelled to make the EITC give up their plans. Unfortunately, one of the Fleets made it to the island. The Black Guard began searching for El Patron's weapons on the island, only to find their old ally, Jolly Roger looking for it too :

With the Fishing update a mysterious island shrouded with fog appeared near Perdida, and with the following update it was revealed to be Raven's Cove.

You will travel to this island in order to complete the Raven's Cove Story Quest at level 30. Players also travel the island to face the dangerous Rage Ghosts which come out at night, whom are a result of the calamity brought out by the battle between the Trading Company and Jolly Roger's army.

Raven's Cove is home to some of the most powerful enemies in the Caribbean, and the only hostile ghosts encountered so far.

No other animals, except for a few wandering chickens and ravens can be found here. 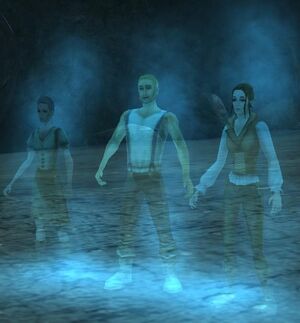 Note: Dig spots do not show after completion of the story quest, the screenshots below show an area where the dig spot should be located.

Once a pirate has completed the story quest, they will be able to find Cursed Blade weapons, either here or on Isla Tormenta. These weapons are frighteningly powerful, but carry the possibility of cursing their owners. This could be a sign of things to come... and once you own one - you should check your /hand for the Evil Curse of Doom.

The seas off Raven's Cove hold a dangerous mixture of hostile ships. Several large EITC ships sail near the island, and several people have spotted the rare Juggernaut here as well, so take caution! A few slightly smaller Navy ships patrol aways offshore as well. Closer to Isla Perdida, there are also some higher level skeleton ships. Every once in a while, The Queen Anne's Revenge is instructed to circle nearby Isla Perdida by Jolly Roger. Raven's Cove can be a good spot to launch your ship to get ready for the Revenge to arrive.

Special Thanks to Andrew Kelts for allowing us to post part of his portfolio.

Retrieved from "https://piratesonline.fandom.com/wiki/Raven%27s_Cove?oldid=336517"
Community content is available under CC-BY-SA unless otherwise noted.