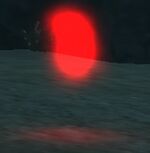 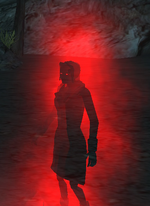 Rage Ghosts are extremely powerful ghostly enemies spotted only on Raven's Cove. They were once citizens of the island, murdered in the onslaught wrought by Jolly Roger's assault in his quest for El Patron's Lost Weapons.

Consumed by rage, confusion, and sorrow, they are now only shadows of their former selves, glowing red with hatred while haunting the nights on Ravens Cove.

They appear at levels 44-52, one of the highest enemy levels seen so far. Their health ranges from 4,150 to 4,950. Rage Ghosts have high aggression (sense you nearby) and will attack anybody at any level and can hit from a distance. Higher level pirates will NOT be attacked immediately, but any aggression will bring swift attack.

They can easily slaughter large numbers of pirates with their only attack, Somber Demise which can cause up to 30,000 damage! Somber Demise is a cutlass attack. When Rage Ghosts appear, sad bone-chilling howling noises are heard.

These ghosts show their spectral body only when they are about to attack, otherwise they will appear as a red orb of fog. Rage Ghosts only appear at night. If and when Rage Ghosts are defeated, multiple lightning bolts strike where the ghost once stood and a chest or pouch will appear; it contains a Blue Red Party Hat.

At sunrise, the terrifying ghouls transform into a more passive form, a Raven. 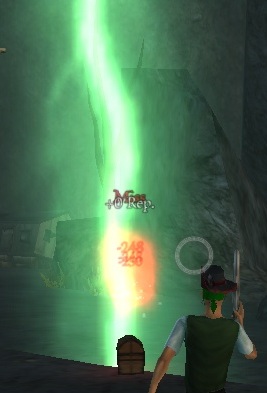 Multiple thunderbolts strike the area where a Rage Ghost is defeated.

Retrieved from "https://piratesonline.fandom.com/wiki/Rage_Ghost?oldid=338368"
Community content is available under CC-BY-SA unless otherwise noted.