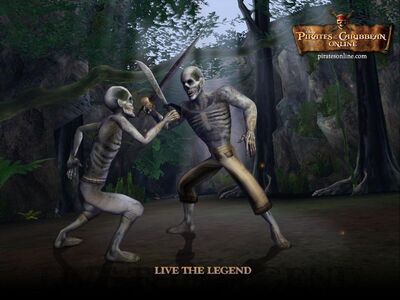 PvP is an abbreviation for Pirate vs. Pirate or Player vs. Player duel events Online.

During normal play, all pirates are allies; in keeping with the Pirate's Code. The Royal Navy, EITC, Jolly Roger's skeleton army and the cursed creatures that stalk the islands are their enemies, but in PvP events, pirates square off against each other in duels, team / crew and mayhem (every man for himself) brawls, and Privateering (Ship PvP) combat.

Duel of the Dead

As in Pirates of the Caribbean: Curse of the Black Pearl, a pirate carrying a coin from the cursed Aztec treasure of Cortez becomes Undead. In Pirates Online, this Curse is used for player combat. While in this form, a Pirate cannot truly die. They can engage in one-on-one, team, or mass melee combat without fear of death or breaking the Code - since they aren't killing a fellow pirate.

You will appear onscreen in Undead Pirate form.

Upon arrival in the combat area, all pirates will briefly have a shield of protection around them to prevent an enemy attack while the player gets oriented. But, be ready! It only lasts a few seconds.

Hint - Be sure to set your weapon belt BEFORE accepting the invitation, otherwise you will have to use the weapons you have already set. That can mean a win or loss in a duel.

During combat, you CANNOT use Potions or Tonics, though you could before the addition of El Patron's Lost Weapons. Also, the effect from any Potion you drank prior to entering combat will no longer work. This is to keep the contest as fair as possible.

When your health reaches 0 - you fall to the ground and restart somewhere else on the map. You will regain health as normal when not taking damage.

In the original Pirate Online, pirates could challenge any other pirate to a duel simply by clicking on their Profile Card, and selecting the Crew Battle option. This option was removed in The Legend of Pirates Online and replaced with 1-vs-1 Mayhem.

A group of pirates can take to the battlefield in two, evenly divided teams.

In the original Pirates Online, pirates had to create a crew before starting their battle and the game would then divide that crew into two teams.

In The Legend of Pirates Online, the Host creates a PvP Team Battle Lobby and teams are either auto-selected or manually set before the battle starts.

Once a server is found, the two groups arrive on opposite sides of the battlefield. A colored icon appears over your head so you can tell friend from foe.

Each time a pirate is killed, the team responsible for killing him or her earns 1 point. You will be scored by your own kills as well as you will see a Team total.

If you selected or joined a team or crew battle. Your teammates will be in Blue on your Compass.

There will be a running timer and combat will continue until the Timer reaches 0 seconds. The team with the most combined kills will win the round.

While fighting, you will be allowed to Heal teammates using your Voodoo Doll - but not Revive.

Unlike team battles where one crew is divided into two groups, one entire crew faces off against another. This allows for mixed numbers as opposed to evenly divided teams. So as few as 2 pirates could face off against a much larger team.

This form of combat is a Pirate Battle Royale. Each scallywag for his or herself. Within the time limit, each pirate tries to take down as many opponents as possible and stay alive.

If you selected or join a Mayhem, all other pirates appear on your compass as Blue dots apart from your friends, they will appear as Pink dots. You will be scored by your own kills. There will be a running timer and combat will continue until the Timer reaches 0. The pirate with the most kills will be crowned the victor.

Each pirate is assigned a unique color which will match the scoreboard that appears each time your pirate is killed and at the end of the match.

﻿With the addition of Infamy, pirates can earn ranks for their ability to brawl. These ranks are earned by receiving points for each PvP kill you make. This value can vary depending on the level of opponent.

This menu is for creating a Lobby for PvP competitions. The Hobby Host selects the type of competition and location, which also dictates how many pirates can join.

Once the minimum number of pirates join the battle (2 for Mayhem, 4 for Team Battles), the Host can click Start to begin. After the battle begins, NO other pirates can join this Lobby.

Choose the location and options for two teams of pirates to complete in combat. Each team must consist of at least 2 pirates.

Unlike POTCO, where teams were randomly assigned, in the Lobby the host can pick which pirate is on which team before the battle starts.

Choose location and options for Free-For-All battle between 2-12 pirates. There is no team designation. Each pirate will be assigned a random color at the beginning of the round.

In TLOPO, 1 vs 1 Mayhem replaces PvP Duels. There is no Duel option.

In future updates, this menu will also have the option for Capture the Chest, a PvP game similar to classic Capture the Flag events in other online games.

In the original Pirates Online, if the pirate has no immediate challengers or friends to take on and is itching for a fight, they can click on the Lookout Menu option (Spyglass Icon). From that menu, they can select from several Pirate vs. Pirate options - including: PVP Mayhem or Team Battle.

Once you've chosen your type of fight, your pirate will be taken to an arena to fight once all invited pirates have responded to the invitation.

Most would say that pirates have no etiquette and whatever goes will go, but some players like a sense of fair play. So, the rules of engagement are often decided before entering actual combat.

A good rule of thumb, if a rule wasn't agreed upon beforehand - don't abide by it. Even if it was agreed before hand, there is not way to enforce said rule, so be ready to fight fire with fire if someone else breaks the rules first. A pirate may gain an easy win by breaking the agreed rules, but it simply means that they may not get a return challenge next time.