Privateering, often known as Ship PvP or SvS, is a Battle mode for Pirates of the Caribbean Online. This mode places you in the heat of a furious battle between the Pirate 'Warlords' of two small islands.

Privateering is a great way to have some fun, gain infamy, and earn a bit of gold as well. This is a great activity in the game, especially for mastered pirates who might get bored at times.

To join ship PVP either:

Hint: Andaba is usually the most popular server for Svs.

Press ~ to get the Ship PvP HUD. This shows the ships battling on your current server, their points and bounty. 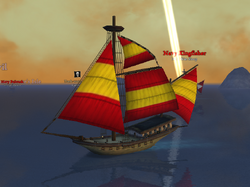 Bounty is affected by how many ships you sink as well as the amount and quality of your ship and its crew. When you first launch your ship your bounty will be low, but not zero (depending upon the vessel's size and crew). As you sink other ships, your bounty goes up. The amount your bounty increases depends on the bounty of other vessels.

This means if another ship sinks you and you have a high bounty, that ship's crew will get more gold and salvage points. And, in turn their bounty gets higher. A ship that continues to sink others and stay afloat will gain a high bounty count and become a more likely target. 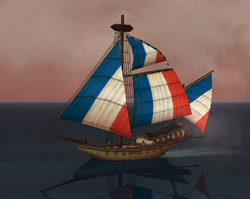 Starting bounty is the bounty you first have when you launch. It is increased depending on what ship you sink and how much bounty it had. It goes down once if sunk.

When sunk the bounty you see in privateer stats after spawning is your current starters.

Note: Starters will be combined with other people's starters if you have others on board.

Determined by how much damage you do to the other side. As you sink ships, your score increases. When you first launch your ship, your score starts at zero. You can see other scores by pressing the ~ key.

With the addition of Infamy, a pirate can now earn points towards rank promotion as a privateer. Each ship they sink or help sink earns points. These points vary based on ship class and the infamy of the vessel sunk. 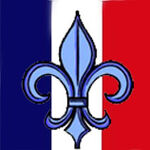 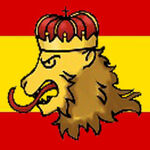 No pirate can be successful for long alone out there. It takes a good group of gunners and a good sailor to lay your enemy to waste.

To acquire hands for your privateer vessel, you can recruit on the beach of the islands, call upon your crewmates, friends and guildmates or turn on the Start Crew option under the Hearties menu to find pirates looking for work.

You can also select the range of crewmen you're seeking by how close they are to your pirate's Notoriety level. Higher level pirates may wish to set this number higher if gunners are scarce.

When the Start Crew is on, pirates seeking a crew will automatically be added to your list and can then teleport to your ship.

For a pirate wanting to join a Privateer crew, it's simply a matter of going to Lookout then Privateer. Or from a privateer island, go to a nearby dinghy and press Shift. Instead of choosing your own vessel, you can select from the privateer ships seeking crewmen.

Sometimes the need may arrive for a captain to give a non-performing or troublesome crewman the heave ho. He won't walk the plank, per se - but the captain can select the crewman who needs to go and then select BOOT.

A removed crewman CAN however return to the ship, if the boarding option is still set to Public. In that case, you should cancel boarding permission to the public.

Once you launch, your ship will appear off-shore under the protection of a glowing shield. This shield will not allow the ship to be damaged as your crew take positions and prepare to weigh anchor. It prevents the enemy from ambushing ships new to the battle. Your ship's sails will have the colors of either the Spanish (Red/Yellow) or French (Blue/White/Red).

Crew use deck guns, while the helmsman uses the broadside guns to engage ships from the opposing team. Destroying sails, however, will NOT affect ship speed. Once, the hull reaches '0', the ship sinks and will re-appear at its home port.

If an enemy ship is sunk, the crew each receive a portion of the bounty money.

Also, the victorious crew receive a Salvage Bonus, that is added to their ship - repairing hull and sail the amount of salvage.

If your ship gets damaged by enemy fire, instead of docking and repairing at the shipwright, you can repair your ship while at sea. See Ship Repair for more info.

When the jobs are complete, the ship's hull and sails will be repaired. These repairs can occur even when the ship is in motion. However, enemy Grape Shot can slow down repair efforts.

Once the ship is fully repaired, any crewman working will stop and return to standing.

At any point, you can return to port. However, once you drop anchor your accumulated points and bounty will be reset.

If your crewmen need to replenish their ammunition, have them teleport to a gunsmith (there are smiths on the privateer islands as well as the main islands) and then teleport back, so your points will not be reset.

Captains (ship-owners) can now teleport off-ship. Previously, they were not allowed to.

If you happen to get sunk during the battle, you'll respawn back at your team's port, fully repaired. The temporary shield will already be on. This can actually be exploited for a free ship repair - just launch from an SvS island and let yourself sink.

After sinking, your Privateering score will be the same, albeit your bounty will be lower.

Completion of the French and Spanish quests will reward the pirate with special tattoos. 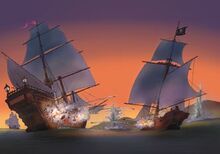