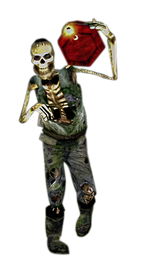 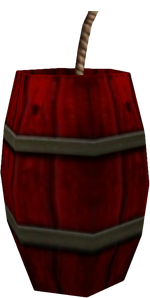 So far, they have only appeared during invasions. Jolly Roger has them haul large kegs of gunpowder and to their main targets - the island barricades. If successful, they cause a massive amount of damage to the barrier, quickening Jolly's assault.

Even if they are killed before they reach their target, the keg will STILL detonate!

Nearby pirates will suffer full force of the blast, which can cause if the toughest pirates to get knocked out or severely injured. The blast radius will damage any pirates in the immediate area.

The strength of the explosion can vary with how many pirates are defending the island and how close the pirate is to the blast. Powder-Keg Runners can appear as early as Wave 2. They may appear a few at a time or in an entire troop.

The best strategy is to attack at long range, having other pirates stay clear until the Keg Runners have detonated.

Keg Runners only appear during invasions on either Port Royal, Tortuga or Padres Del Fuego.

Retrieved from "https://piratesonline.fandom.com/wiki/Powder_Keg_Runner?oldid=344216"
Community content is available under CC-BY-SA unless otherwise noted.