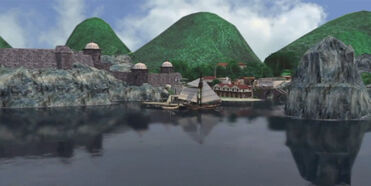 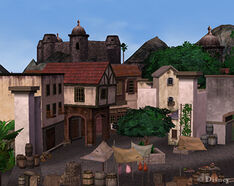 Below is the soundtrack that is played while on Port Royal.

Wealthy and civilized, Port Royal's air comes from its place as the official center of Caribbean trade. Unfortunately for its civilized residents, its location also makes it a perfect spot for pirate raids, despite the nearby Navy presence at Fort Charles. Port Royal is the home of Elizabeth Swann and Will Turner.

Port Royal was a major city and harbor in the Caribbean, (and not to be confused with Port Royal in New France) situated on the western end of Palisadoes in Jamaica. It was founded by the English, and the Royal Navy maintained a presence at the governmental Fort Charles. It doesn't have many enemies and is normally a peaceful town.

Port Royal was built around Fort Charles, which was England's largest government fort in the Caribbean, and was armed with cannons intended to protect Navy ships in the harbor below. The port was governed by Weatherby Swann, and despite its sizable naval presence, it became a popular place for pirates to bring and spend their treasure. Executions of known pirates were held at the fort, and three skeletons hung outside the bay, as a warning to incoming pirates of their fates.

Port Royal was accessible via a large harbor, used by both merchant and Navy ships. The HMS Dauntless was a common sight at the harbor during James Norrington's tenure in the Navy, while the HMS Endeavour was later moored there during Cutler Beckett's residency. The latter maintained an office overlooking the dock, which was refitted prior to his arrival in Port Royal.

The town was situated inland from the harbor, leading up to the Governor's mansion, and included everything from taverns and inns to blacksmiths and apothecaries. Street markets were prevailing also, though as the town had expanded in the decade of Swann's governorship, the local sewer system was unable to cope, and gave the air a distinct odor.

Just outside of Port Royal were a series of caverns. These caverns were used as a hideout for smugglers and pirates.

Jamaica was taken over by the English forces in 1655 and became an important stronghold of British power in the Caribbean. Port Royal was built in 1657 and soon became a hideout for pirates and privateers. Henry Morgan used it as the main base for his piratical raids to the Spanish Main.

Port Royal was a haven of the wicked and pirates. Then, in 1692, a huge earthquake destroyed the town, which honest people saw as an act of God to get rid of the wickedness of the city. Then in 1694 the British rebuilt it and it was the center of all British operations in Jamaica.

By the time of the reign of King George II, Port Royal was a prospering town. It doubled its size and population within 10 years, which led to some problems with the sewer systems.

Port Royal suffered an attack by the Black Pearl following the promotion of James Norrington to the rank of Commodore, hosted at the fort. During the attack, the Governor's daughter, Elizabeth Swann, was kidnapped and taken to Isla de Muerta. Later, the fort was set to host the execution of Captain Jack Sparrow, though, with the help of William Turner and the crew of the Black Pearl, he managed to escape the hangman's noose.

Some time later, Lord Cutler Beckett of the East India Trading Company set himself up in Port Royal.

On January 27 2009, the Pirates of the Caribbean Online developers completely redesigned the layout of Port Royal.

Here is what happened to the island inducing changes to Port Royal. 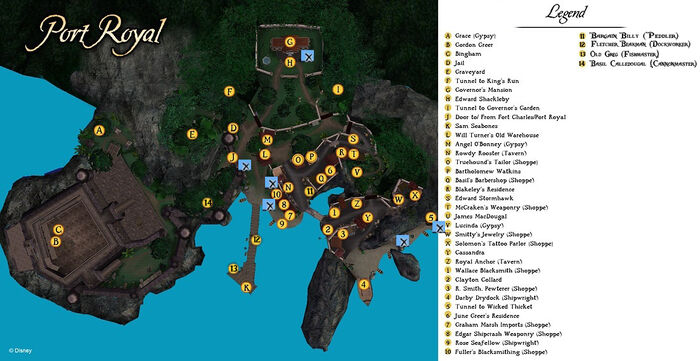 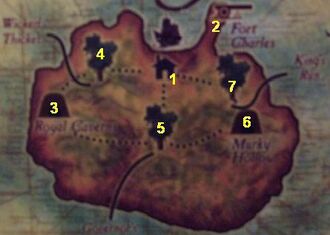 Town [1] - Unless you just like beating up weakling Navy Cadets, weak Undead in the Cemetery and the occasional Navy Guard, you won't be doing much killing here.

Fort Charles [2] - The most obvious location on the island is the iconic stone structure atop the hill. It is home to mostly low-level Navy soldiers, but a few veterans and a trio of EITC goons, including a Mercenary or Hired-Gun can be found. Of course, you can't use your pistol, but there's plenty of blade work and voodoo to be had if your skills are under double-digits.

Royal Caverns [3] - This underground site is similar to Beckett's Quarry on Padres Del Fuego with lots of EITC and Navy, but the bad guys here are several levels lower. Actually a good place to work on blades and voodoo for medium-levels. The worst enemy is a couple of Navy Veterans.

Wicked Thicket [4] - This patch of jungle has a lot small critters, low-level Navy and low-level undead. This is one of the first places most beginners work on blades and pistol.

Governor's Garden [5] - The area behind Elizabeth Swann's family home is filled with relatively weak Undead, some basic critters and a couple of low-level Navy; it is similar to the Tortuga Graveyard. This spot is usually just a walk-thru to the Royal Caverns or Murky Hollow unless you're looking for a specific enemy.

Murky Hollow [6] - This dank cavern is where the undead legions of Jolly Roger's army of the undead are spawning. Plenty of low-level undead and many Undead Brigands are present, as well as a boss, General Bloodless.

King's Run [7] - This dark jungle holds a lot of very low undead and a few gators. Likely, you'll be cutting through on your way to the Murky Hollow.

High Seas - The straits between Port Royal and Devil's Anvil are filled with light craft. A warship can plow through in seconds and win no reputation for the trouble, but light ships can rack up good sailing and cannon right close to home. A couple of high level ships popping up can make it dicey, so be careful. There is a large cluster of light ships west of the island. Head east to Padres Del Fuego to fish for the whoppers.

There are no stationary bosses currently to be found on Port Royal. However, numerous random bosses make appearances from time to time, replacing regular enemies.

These citizens have been reported missing! Folks fear the worst, but perhaps they will return safely someday! 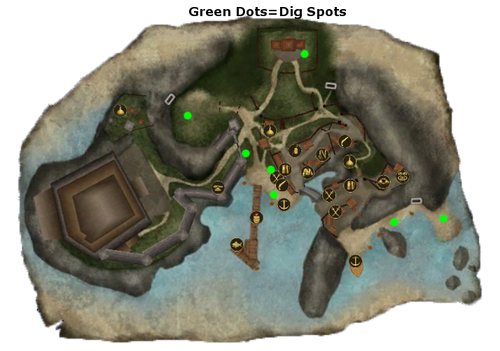 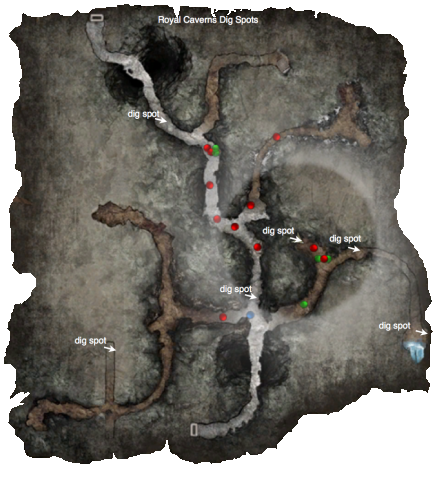 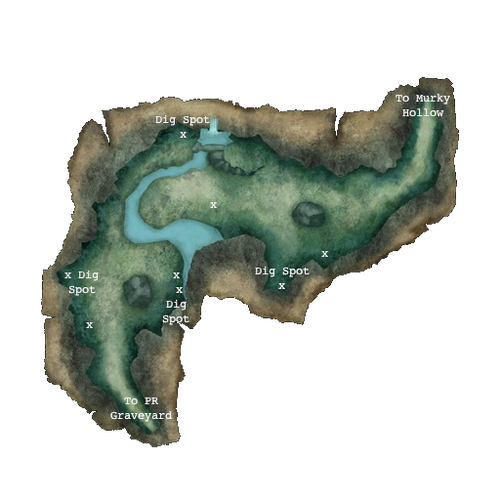 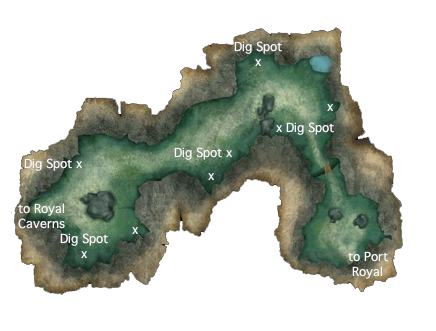 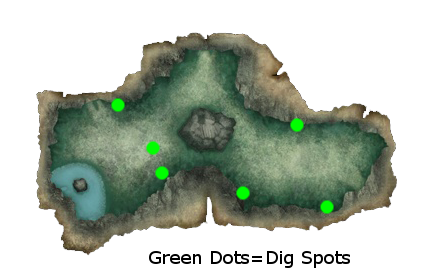 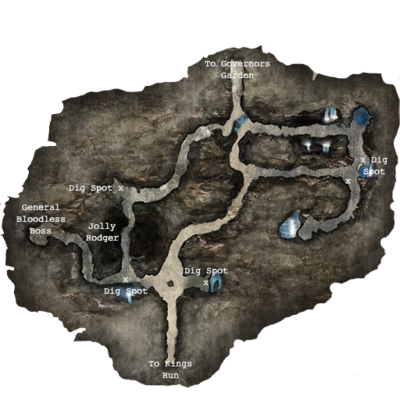 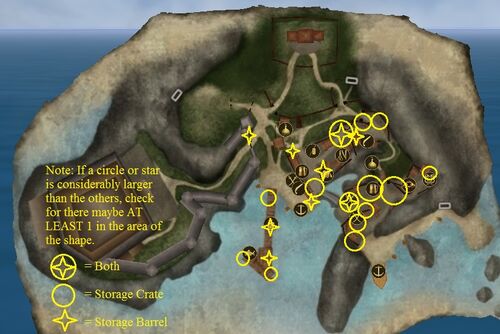 Jolly Roger hatched a plan to form an Invasion of the capital island, but he could not assail it due to amulets of protection, buried by voodoo practitioners. These amulets keep Jolly at bay. But he sought help in the form of Captain Ezekiel Rott, a captain who, along with his crew, would surely have been doomed. Rott was told to hire pirates to dig up the amulets and sabotage the Royal Navy forces - leaving the island vulnerable.

Brave citizens and pirates are all that stand between Jolly Roger and the Governor's Mansion! Port Royal was also the first island to be invaded.

Retrieved from "https://piratesonline.fandom.com/wiki/Port_Royal?oldid=337759"
Community content is available under CC-BY-SA unless otherwise noted.