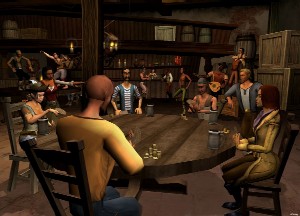 Nothing like a game of cards to separate the pirates from the landlubbers! Playing Poker requires a pirate to make bold moves but also to be crafty. And sometimes, be down-right underhanded!

Currently, only one type of Poker is played in the taverns, Tortuga Hold'em (similar to Texas Hold'em).

For a full set of the rules to Poker check out the Wikipedia Texas Hold'em Page.

Not all taverns have a Poker table and different locations have different betting amounts.

*There are Undead Poker tables in the Rat's Nest (Tortuga) and Hollowed Woods (Port Royal). But that be a very different game.

In secret locations throughout the islands are private dens of gambling, where pirates can meet in quiet and play invitation only hand of Poker or Blackjack. These Underground Parlor Games can be found, by selecting the Lookout Menu (L).

Then, choose what kind of game you want to play. Once a match has been found, your pirate will be teleported directly to the clandestine site.

What Am I Doing?

The goal of Poker is to have the best hand, or at least make your opponents think you do and have them drop out.

In Hold’em Poker, some cards are face-up on the table and are combined for the best hand with each player’s own hole or pocket cards (unseen).

Unlike Texas Hold’em, players must continue through all rounds of betting, unless others Fold. There is no option for All-In (bet everything you have), unless it is less than the current bet.

To begin play, walk up to the Poker table, once the green ring appears you will be prompted to join the game. Press Shift to take a seat. Even if there are only NPC's playing, you will need to wait for the last hand to finish before it will be your turn. 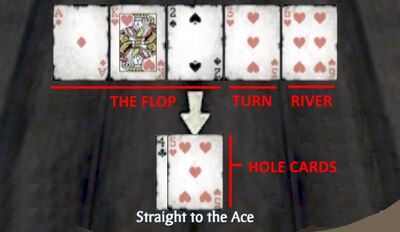 In Hold'em, the pirates who must pay for the first round (Big and Small Blinds) rotates around the table each round. The Big Blind pays the full amount of the starting bet, the Small Blind pays half. All others can get their first two cards (Hole Cards) for Free. But, if they want to play the Hand then they must pay the full Ante amount (Big Blind).

In the first round, each player is given two Hole Cards (Pocket Cards). Only you can see your Hole Cards. And everyone Bets, Raises the previous bet, Checks (no bet) or Folds based on these two cards.

In second round, the dealer throws out three cards face up. These cards are now part of your hand. They're added to the value of the Hole Cards. If the combination makes any kind of named hand the text will appear below your cards (Ex: A Pair, Three of a Kind, etc.)

This next round is a single new face-up card. It's called the Turn Card (or 4th Street). If it improves your hand, the text below your Hole Cards will change. Otherwise, everyone still playing bets or checks again.

The final round is the last face-up card. The River (or 5th Street) is your last chance to make a strong hand as every one places their final bets.

After the final bet, winner(s) will be declared. Ties are possible. The pot will be rewarded and the dealer clears the table to shuffle the cards and start over. If anyone was caught cheating, at this point they will be busted and removed from the table.

The old adage used to be ‘Play Strong when Weak and Play Weak when Strong” – or “bet a lot when you have crud, and don’t bet when you got good.”

Two problems with that. This is isn't real gold, so bluffing won’t work the same way – it can still work, just not reliably. And second, if you don’t bet on a good hand, then why play it?

Checking each round gets you no money.

You shouldn’t bet unless you have something; either an opening pair of hole cards, an Ace, two face cards, or two sequenced cards (preferably of the same suit). You’re building on something, not praying and fishing.

That said, if you paid the blind and it's free it won’t hurt to Check and see the next 3 cards (flop).

If everyone checks, do they have anything? After two rounds of everyone checking, go ahead and bet. If they’re all fishing for a prayer, they’ll likely fold. Should someone call you, then at least money is in the pot and you know something is in play.

Bluffing is an art. Either start early or… when the next card shows potential. (Ex. If a 6 of Diamonds, Jack of Hearts and an 8 of Spades is showing, the best you be hiding is three of a kind. So, a bluff likely wouldn’t fly. But, if the Flop shows a potential straight, flush or a pair, you could be hiding something big.)

If you’re going to bluff, you have to keep it up. You can’t keep raising and raising, then at the last card just check. The jig is up at that point.

The NPCs CAN bluff. They may bet big and have nothing, but they tend to play conservative. On the flipside, it's possible to bluff NPCs as they may fold if you bet and they have a low hand.

People are creatures of habit, especially when they are nervous! Pirates are no different. If a pirate has a good hand, they may just tell you.

These gestures, even for player pirates are involuntary. So unfortunately, your pirate may just give the ghost that you're sitting on that Full House.

Unlike (we hope) games you play with your friends, you can cheat at cards! If you get a card up your sleeve, you can swap it into your hand! Arrrrrr, now this be fun!!

There is currently two ways to cheat in Tortuga Hold’em: Card Swapping and Crew Chat.

Card Swapping is built into the game. It’s what those cards you keep finding are for (See Cheat Cards). During your turn, the game will prompt if you want to Swap Card. You only get 1 swap, make it count.

What's Up Your Sleeve?

Now, when playing your hand, you can chose to Swap First or Swap Second of your 'hole' card. The card inventory will appear. Make sure you've got a steady hand when you click, otherwise, you might be swapping out for a card you don't even want.

Swapping a card isn't guaranteed. For some reason, the swap may just not happen. You will not be caught if it fails, but you will lose the card.

If you decide to cheat, do it sparingly. Other players will know if you take 30 seconds every hand.

You shouldn’t risk card swapping for a small money game or hand; save’em until the pot is worth it. It’s hard enough to find’em.

Hold off on card swaps until the LAST round (River Card). Swapping before the flop cards may net you a pair, but if the flop would have given you a perfect flush or straight – you just missed it.

If you do cheat and win big, do yourself a favor and get up from the table, even if to just change seats. If you don’t and get caught later, all that money is gone. The game registers each sitting as separate.

Pay attention to the cards in play! Pulling a cheat card that is on the table will send you right to jail. Also, beware that the other players may try and swap for the same card you are. The most obvious hand could be the one that costs you.

When two or more players crew up together, Katie bar the door. Here is where some real money can be made.

It’s simple enough, crew up with your mate(s) and have a seat.

As the cards are dealt, just tell each other what you have in Crew Chat. Once it’s decided who would have the winning hand, the crew gets to work on the other players and the NPCs.

Each round, members of the circle raise to build up the pot. A little practice will teach when it’s good to call and when to stack’em up. If all other players fold, then the crew just picks who takes that pot and the rest fold.

Fortunately and unrealistically, any money you lose playing poker does not count against you. As long as you win poker pots totaling the required amount, you will succeed in your quest.

In POTCO and TLOPO there are no opportunities to trade or give gold to other pirates. However, there is a loophole - by receiving gold in a poker game from fellow pirate(s) in large, agreed upon quantities.

To do this, first you must find a not-so-crowded tavern (or go to an Underground Parlor Game. Look for a tavern with an empty Poker table.

Second, the trading players sit at the table, raising every time around. If any NPC players call twice, you call, then raise when again when the next card is dealt. If an NPC is still bidding by the last card (Turn), they likely have a strong hand and you will need to start over.

Once all NPCs have folded, crank up the bids, each player raising. When the target amount is reached, the donor(s) fold or presses "Esc". The entire pot is given to the receiver. Repeat as needed to give your mates some charity.

Retrieved from "https://piratesonline.fandom.com/wiki/Poker?oldid=337927"
Community content is available under CC-BY-SA unless otherwise noted.