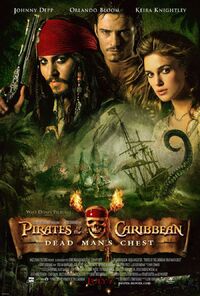 Information about the two sequels to Pirates of the Caribbean: The Curse of the Black Pearl was presented at a Disney Investor Conference Studio Presentation in 2005. The title for the first sequel was revealed to be Dead Man's Chest, and a second sequel was promised for a May 2007 theatrical release.

Locations were in the Costa Alegre, in Jalisco (Mexico) and Barrouallie, St. Vincent. The sequel also includes location shooting in Dominica as well as The Bahamas. The filmmakers are largely shooting the two sequels back-to-back, à la The Matrix Trilogy, although throughout 2005 primary filming was for Dead Man's Chest, with only a handful of scenes for the third movie being shot. Because of the back-to-back setup, filming for Dead Man's Chest was not finished until February 7 2006.

Dead Man's Chest premiered at Disneyland in Anaheim, California on June 24 2006, two days prior to the reopening day of the refurbished Pirates of the Caribbean attraction on which the movie series is based. The refurbished attraction includes an adjusted storyline and Audio Animatronics based on the movies and opened June 26 2006. The same attraction at Walt Disney World in Florida also underwent refurbishment and reopened on July 6 2006 in conjunction with the film's theatrical release.

As the age of piracy nears its end, a new threat arrives in Port Royal—the East India Trading Company. Guiding the company's monopolistic expansion in the Caribbean is Lord Cutler Beckett (Tom Hollander), a powerful and ruthless EITC agent. Beckett intends to eradicate all pirate activity from the area. To this end, he arrests Elizabeth Swann (Keira Knightley) and Will Turner (Orlando Bloom) shortly before their wedding ceremony, threatening to execute them and the absent ex-Commodore James Norrington (Jack Davenport) for abetting Captain Jack Sparrow's escape. What Beckett really wants, however, is Sparrow and his magical compass, and he coerces Will into searching for both by offering clemency.

While Elizabeth languishes in jail, Will frantically searches for Jack. An informant in Tortuga leads him to the Black Pearl that is run aground on Pelegosto, a cannibal-inhabited island where Jack and his crew are captive. Jack had hidden there after being visited by his former crew mate, "Bootstrap Bill" Turner, who is now an indentured sailor on the ghost ship, the Flying Dutchman. Bootstrap delivered the Black Spot to Jack, a mark that his debt to Davy Jones is due. Thirteen years previously, Jones raised the Black Pearl from the ocean floor and made Jack the captain. In exchange, Jack must now serve aboard the Dutchman for 100 years or face Jones' leviathan, the Kraken.

Will, Jack and the crew escape, unexpectedly recruiting Pintel and Ragetti as they are attempting to commandeer the Pearl, and head to sea. Jack has been searching for a key that leads to untold riches, but his magical compass fails to work for him. Jack agrees to give Will the compass if he helps him find the key and what it unlocks. Seeking assistance from Tia Dalma (Naomie Harris), a voodoo priestess, Jack learns the compass will not work because he does not know what he truly wants—or he knows what it is and is unable to claim it as his own. The key, Tia tells him, unlocks the Dead Man's Chest containing Davy Jones' beating heart. When the pain of lost love was too much to bear, Jones carved it from his chest and buried it. Whoever possesses the heart controls Davy Jones, thereby controlling the oceans. Back at sea, the Flying Dutchman encounters Sparrow, who deviously attempts to barter Will in exchange for himself. But Jones demands 100 souls within three days for Jack’s freedom and keeps Will as a "good faith payment."

In Port Royal, Governor Weatherby Swann frees Elizabeth. Confronting Beckett at gunpoint, she forces him to validate a Letter of Marque—a document with which he intends to recruit Sparrow as a privateer and that Elizabeth wants for Will. Stowing away on a merchant vessel, Elizabeth lands in Tortuga where she finds Jack and Gibbs recruiting unsuspecting sailors in a pub. A fallen James Norrington also applies. Blaming Sparrow for his ruin, he tries to shoot the captain and ignites a brawl. Elizabeth knocks him out to save him from the angry mob. At the dock, Jack reveals the compass' secret to Elizabeth; it points to what the holder wants most in the world. When he convinces her that she can save Will by finding the chest, she uses it and gets a bearing. Once the ship is underway, tension arises between Jack and Elizabeth when each discovers the compass now points to the other. It is unclear if they desire one another or if each seeks the other as a means to obtain what they truly want.

On Isla Cruces, Jack, Norrington, and Elizabeth find the Dead Man's Chest. Will, who has escaped the Dutchman with help from his father, Bootstrap Bill, arrives with the key. Will wants to stab the heart to free his father, but a three-way duel erupts between Jack, Norrington, and Will, each claiming it for himself; leading to a battle at an old mill resulting in the mill wheel breaking off and rolling away with Will and Norrington fighting atop it with Jack chasing after them to get the key. Jack climbs onto the moving wheel, gets the key and hoists himself off the wheel (using a passing palm tree) just before it rolls down a slope, picking up speed. Jack opens the chest and takes Davy Jones's heart back to the beach, where he puts the heart in the jar of sand. The Dutchman sailors reach the beach and Norrington manages to escape with the heart and the Letter of Marque. Jones’ crewmen retrieve the chest, unaware it is empty.

The Flying Dutchman pursues the Black Pearl, but with the wind behind them, the Pearl outruns the Dutchman. Jones ends the pursuit and instead summons the Kraken. In a moment of cowardice, Jack abandons the ship in a longboat while they're under attack, but unable to desert his crew, he returns in time to save them. He gives the order to abandon ship before the Kraken returns for its final assault. ‎Realizing the Kraken is hunting Jack, a deceptive Elizabeth passionately kisses him while handcuffing him to the mast, telling him that she is not sorry. Racked with guilt over her deceit, she tells the others Jack chose to remain behind, unaware Will witnessed what happened. Jack manages to free himself and charges the Kraken right into its maw, and the colossal beast drags him and the Pearl to a watery grave. Watching from his ship, Davy Jones declares their debt settled, but he becomes enraged when he discovers that the chest is empty, and roars, "DAMN YOU, JACK SPARROOOOW!"

Arriving in Port Royal, Norrington presents the heart and the Letter to Lord Beckett in a bid to regain his career. Cutler Beckett now controls the seas.

The grieving crew seeks refuge with Tia Dalma. Consoling them, she asks if they would sail to the World's End to return Jack and the Black Pearl. When they agree, she says they will need a captain who knows those waters. Incredibly, the formerly dead Captain Barbossa (Geoffrey Rush) descends the stairs, eating an apple and asks what's become of his ship.

After the credits, we find out what happened to the dog the cannibals chased after eariler in the film.