One feature to Pirates of the Caribbean Online is the Pirate Profile. It allows you to view detailed information about a fellow pirate and interact with them.

First, the profile shows the pirate's name and guild (if any) at the top. Below on the left, is the pirate's current Notoriety level and their Health and Voodoo levels. The image of the pirate shows how they are currently dressed as well. If the pirate has an Unlimited account, the name will show in Blue, if it is a Basic account then it will show as Gray. Founders will have a Gold Name and can choose to have a Gold Coin next to the name.

To the very far right, appears a page tab. If you click on this tab, it will slide open to reveal the pirate's skill levels. 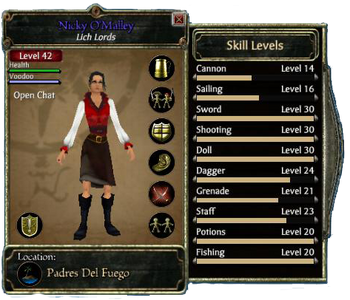 To the right of the profile picture are six function icons.

Retrieved from "https://piratesonline.fandom.com/wiki/Pirate_Profile?oldid=323052"
Community content is available under CC-BY-SA unless otherwise noted.