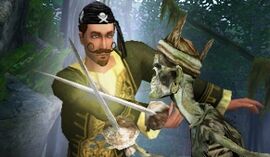 A pirate is anyone who commits the act of theft on the high seas. This can be in the form of outright theft of a vessel, or to plunder a vessel for its cargo or treasure.

A pirate that is paid or licensed by a country to plunder and loot is a Privateer or Corsair. This license is called a Letter of Marque.

Other terms for pirate include: Buccaneer, Freebooter, Swashbuckler or Sea Dog. When the player creates a pirate character with a customized name, they will be listed as one of these synonyms until the name has been approved.

In Pirates of the Caribbean Online, "pirate" also refers to a player's character (avatar) or any other player or character - since the players are all portraying pirates.

In this Wiki, references to the player character may be listed as 'the pirate'.

Retrieved from "https://piratesonline.fandom.com/wiki/Pirate?oldid=332033"
Community content is available under CC-BY-SA unless otherwise noted.