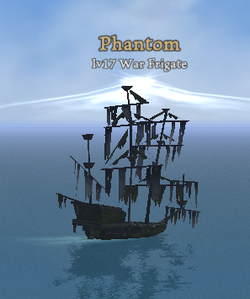 The Phantom is a level 17-19 skeleton War Frigate fighting in service of Jolly Roger. This vessel carries seven deck cannons and ten broadside cannons on each side.

They most frequently spawn around Isla Perdida, occasionally around Driftwood Island and Cuba and can be found in the Skeleton Fleet around Padres Del Fuego. The ship is armed with Thunderbolt and Chain Shot.

This ship actually appeared on the shipwright menu briefly following an update. It was quickly removed due to the fact the option was not yet to be made available.

Retrieved from "https://piratesonline.fandom.com/wiki/Phantom?oldid=323259"
Community content is available under CC-BY-SA unless otherwise noted.