Patricio Luckless is a Undead Gypsy boss residing in Tortuga Graveyard in his shop, Patricio's Potions.

The pirate must confront Patricio as part of the A Hexed Sparrow quest during the St. Patrick's Day holiday. During the quest, the pirate is trying create a new lucky charm for Captain Jack Sparrow.

Tia Dalma sends the pirate to find Patricio, fearing he may become a victim of Jolly Roger and his latest scheme. Sadly, the voodoo mistress is right; Patricio has become undead - serving Jolly's whim.

He only appears during the St. Patrick's Day holiday, otherwise his shop remains empty with a spectral image of Jolly haunting the space. 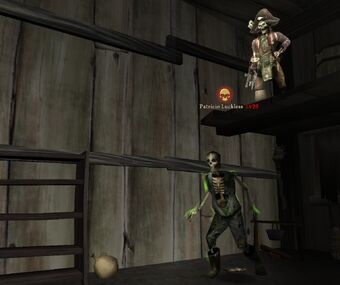 Retrieved from "https://piratesonline.fandom.com/wiki/Patricio_Luckless?oldid=333121"
Community content is available under CC-BY-SA unless otherwise noted.