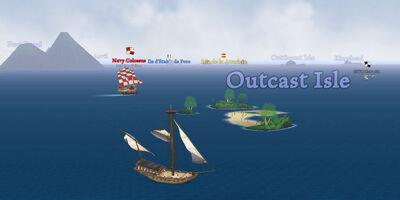 Below is the soundtrack that is played while on Outcast Isle.

Outcast Isle is a little island home to only two things, Ancient Fly Traps and Stumps. Though it is the farthest point southwest, the island is a good mid-point between Cuba and Padres Del Fuego.

Beach - Most players come to this remote island for Stumps. There are three on one of the atolls and it's easy to stand at the shoreline and pull two of them to you. Stumps give great reputation points and you can use your entire arsenal on them. But, best not to go alone unless you're 28+.

High Seas - Mostly mid-level vessels are between Isla Tormenta and Outcast. But, between Outcast and Padres - a large number of dangerous and high-level warships can be found, including the massive Royal Navy Colossus flagships.

The Prison Dog makes a cameo on a small inaccessible island (far right) whose purpose is supposed to just be a fun easter egg. This same "dog with the keys" also appears in the jail in Rambleshack where the player first starts out.

Retrieved from "https://piratesonline.fandom.com/wiki/Outcast_Isle?oldid=322522"
Community content is available under CC-BY-SA unless otherwise noted.