Old Sooty was the nickname given to Phillip Stallworth. Phillip was known far and wide as an excellent cannoneer and expert ammunition man. But as the years wore on, the constant exposure to firearms and explosions had a harsh affect on Phil’s mind, which would wander as Phil talked for hours about the insignificant details of cannons. Phil signed on to sail with Captain Cromwell just a year before they both lost their lives. Phil never liked Cromwell much, but cared for the Captain’s cannons like they were Phil’s children. After a few months aboard, his shipmates noticed that Phil never washed the cannon soot off his face so they took to calling him, Old Sooty.

Old Sooty and Captain Cromwell never got on very well and one day as they argued a pair of Royal Navy warships appeared on the horizon. Cromwell commanded they fire on the Navy vessels, but Old Sooty refused. Cromwell then commanded his first mate execute the order, but the cannons were Phil’s to fire. He angrily accepted the order, rather than have anyone fire his precious guns. In the commotion a chain shot meant to disable one of the Navy warships was tangled around Phil’s leg. In the heat of battle, the chain shot was fired – and Old Soot was sent flying into the water, carrying him to Davy Jones' Locker. 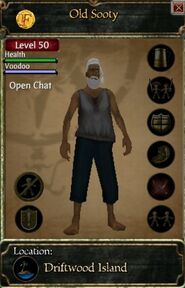 In the afterlife, Jolly Roger tried to enlist Sooty into his Undead Army, but legend has it, he was so daft and chatty that Jolly couldn’t stand him and sent Sooty back to haunt the living. Now, Old Sooty wanders land and sea in limbo, looking for Captain Cromwell and talking the ears off anyone who might listen to his tales.

Old Sooty is none other than the uncle of Marceline's new guild master, Xavier Hench. Even in the afterlife, Sooty continues to be a mentor to Xavier and the two often visit and talk at length when Sooty can visit the planet from the other side. 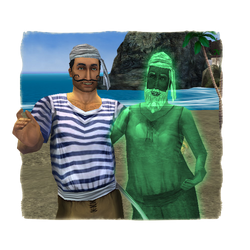 Retrieved from "https://piratesonline.fandom.com/wiki/Old_Sooty?oldid=330656"
Community content is available under CC-BY-SA unless otherwise noted.