Legends are built on reputation and fame or infamy. A pirate's deeds make him more and more notorious. This notoriety is what makes you feared, respected, and WANTED.

Notoriety is the basis of the advancement system. Pirates earn reputation points to increase their notoriety level. Notoriety is not only awarded for completing quest tasks, winning battles, and sinking ships, but also for experience gained in using weapons and skills. 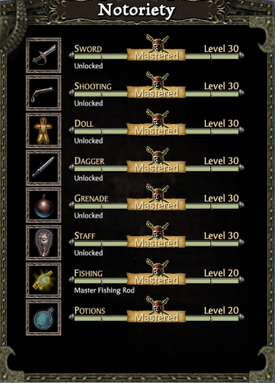 A pirate is rated by their Notoriety. At the beginning of the game, the pirate is Level 1. After all, you're just some riff-raff who washed up on the shore of Port Royal.

Performing quests, using skills, and killing enemies earn you points toward the next level. Each level is harder to gain than the last, as your abilities and challenges increase.

Upon accumulating enough Notoriety, the character gains a level, which bestows an increase in maximum Health points and Voodoo power.

Lesser increases are obtained when a character gets enough points in a skill to gain another skill point.

As Notoriety is gained, new quests will become available. Many of these new quests are for special weapons, teleportation totems, and rare treasures.

Currently, the maximum notoriety a pirate can currently reach is Level 50. Once they are level 50, they are classified as a Master.

When a pirate levels up, there is a yellow glow around their pirate.

The most points gained toward Notoriety is by completing fame quests and Fortune Quests.

As a pirate completes fame quests, others open. Portions of fame quests may only reward +100 notoriety points, but completion of a larger quest may be worth 1,000 - 2,000 points+.

Most fortune quests do give limited Notoriety points, but any experience points gained using skills and killing enemies will add to the pirate's total.

Fighting enemies or sinking ships are the fastest ways to get reputation, and sometimes the easiest.

The reputation points earned for defeating a foe are scaled to the relative level of the foe to the current character skill, which is indicated by color of level values of NPC foes.

Another quick way to boost your Notoriety points is by being part of a crew. Even on land, pirates who work together are rewarded with more plunder and experience points. So, it's in the player's best interest to hook up with other pirates nearby, even if they've never met or worked together before, as it can be quite rewarding.

Often, Pirates of the Caribbean Online will hold special events where pirates earn DOUBLE points for all Notoriety events and Combat. When these special events occur, all pirates should make a point of getting involved in order to get their skills leveled and move up faster. Another way is through earning the reward of double reputation through completing special quests.

Pirates who use basic accounts will suffer a penalty on all reputation earned. They also will be capped to how many skill points they can spend or new skills they can buy.

Prior to December 2009, basic members would receive +25 notoriety each time they receive a "treasure" (same as unlimited do) regardless of the notoriety level. Now, if you are level 14 or above, no additional points are awarded.

Prior to December 2009, there was no cap for notoriety on basic members; only weapons were locked. So doing side quests (e.g. Port Royal clothing quest) would award notoriety properly.

You can access the Notoriety in the Sea Chest by pressing the 'Y' key on your keyboard. This will show your current level for all Weapons, along with Potions and Fishing level. This will allow you to see how much notoriety you need without pulling out that weapon or entering the Fishing, or Potions Mini game.