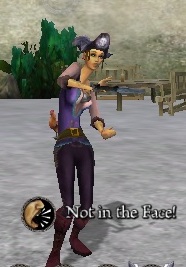 Not in the Face! is a special weapon skill found in some Swords, Daggers, Guns, and Voodoo Dolls. The pirate shouts "Not in the Face!" and ducks back, avoiding an attack. When used, there is a chance that the enemy will hopefully stop attacking you and move on to another opponent, and if you are running away, there is a chance the enemy will not follow, making it easier to disengage an enemy in a hurry. The weapon skill is found on weapons traditonally used by robbers or killers without a code of honor or moral code. Not in the Face! charges over time when the weapon is equipped.

These weapons have the Not in the Face! ability.

Retrieved from "https://piratesonline.fandom.com/wiki/Not_in_the_Face!?oldid=338614"
Community content is available under CC-BY-SA unless otherwise noted.