Neban the Silent is one of the deadliest members of the EITC's Black Guard in the entire Caribbean, on par with Remington the Vicious. He appears at Level 28-35, and seems to be working as a taskmaster in the dangerous Beckett's Quarry on Padres Del Fuego, also usually backed up by other EITC and Royal Navy troops. He can be found in a lava cave near a group of Mercenaries, not far from the entrance to El Sudoron.

Neban works as an assassin for Lord Cutler Beckett and is very hard to defeat alone. He attacks pirates with his daggers and throws with great skill. He has a very high amount of health points and can use all dagger skills, including Viper's Nest.

His infamous nickname stems from a hideous scar across his face where his mouth had to be stitched. The source of this scar remains a mystery.

It is rumored Neban's loyalty to the East India Trading Company and it's infamous director, Cutler Beckett, was rewarded with a special Legendary item and that he carries a copy of Beckett's Pistol upon his person. 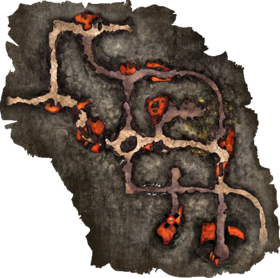 Retrieved from "https://piratesonline.fandom.com/wiki/Neban_the_Silent?oldid=332048"
Community content is available under CC-BY-SA unless otherwise noted.