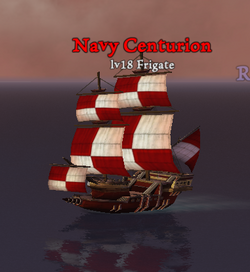 The Centurion is a class of medium Frigate in service of the Royal Navy. This vessel carries five deck cannons and seven broadside cannons on each side.

They are often found in the waters around Tortuga, Cuba, Isla Cangrejos, Isla Perdida and between Port Royal and Cutthroat Isle. Even though they don't use special ammunition, they can deal a fair bit of damage from rapid barrages of Round Shots.

During the early days of the game, a Centurion Flagship would patrol the waters around Kingshead.

Retrieved from "https://piratesonline.fandom.com/wiki/Navy_Centurion?oldid=329939"
Community content is available under CC-BY-SA unless otherwise noted.