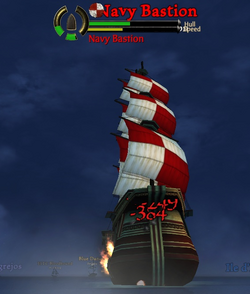 The Navy Bastion was a Level 59-65 War Galleon formerly in the service of the Royal Navy. It was the most powerful regular route ship to be found in the Caribbean at that time. This ship used to appear around Port Royal, between the capital island and Devil's Anvil, Cutthroat Isle, or Cuba.

They are no longer in the game. It is believed to have 12 broadside cannons and 5 deck cannons on each side. Also, it is unknown what shot types they used. These ships were also taken from the Test Server. It is unknown if the Bastion will ever return to the game. 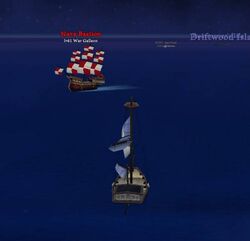 Retrieved from "https://piratesonline.fandom.com/wiki/Navy_Bastion?oldid=324374"
Community content is available under CC-BY-SA unless otherwise noted.