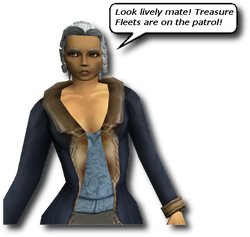 NPC's, or Non-Player Characters, are characters in Pirates Online that the player can interact with but are not controller by a player or even a Game Master. They simply auto-reply for quests, healing or merchant purchases. If, however, they NPC has nothing for you for the player, they will say a random automated quote. The quote appears above their head in a word bubble.

Quotes are used to hint of coming events, new features or to give playing tips. (Example: When Raven's Cove was added, NPCs warned pirates not to go there.)

These quotes used to appear in chat, but no longer do; likely due to spam caused when abused.

"I've no time for idle chatter,Come back another time."

"I've got cargo to handle and EITC rats sniffing around. Come back later."

"Stay ahead of Bounty Hunters an' streamline yer ship for speed!"

"Spare a doubloon? I'm looking to buy that beauty of a ship, the Brig."

"What're ye waitin' for? There are new sail designs to be had!"

"Psst, ship upgrades are the best way to stay alive at sea."

"Have ye customized yer ship and sails yet, mate?"

"Ship sails, hull, rigging - rumor is you can now improve 'em all."

"Why are you talking to me when there are Bandits attacking! Get to the Cannon Defense Towers!"

"Pirates have found the mighty Sword of Triton, but the true prize be the ship from where it came!"

"Got any new weapons? Like the Sword of Triton?"

"Sabres, broadsword, cursed blades and now the Sword of Triton!"

"Seen Blackbeard's Sword of Triton, it's jeweled healt is one to admire!"

"Legend tells us the Sword of triton holds special ailities when used against the crew of the Queen Anne's Rrevenge."

"Blimey, rumors of the Queen Anne's Revenge stalking ships at sea be too much for m'nerves!"

"I would not dare challenge the Queen Anne and her mighty crew!"

"Invasions, Fleets and now the Queen Anne's Revenge! 'Tis a time of great conflict in the Caribbean."

"I hear the Queen Anne's Revenge sails with vast plunder. But only the bravest would dare accept that challenge."

"Our spies say that Jolly's furious so expect more invasions."

"The Undead invasion will only end when Jolly's defeated...permenetly."

"Jolly will NOT stop invading until he rules the islands!"

"Think Jolly will stop invading because he got some Lost Weapons? No way!"

"Port Royal is for the people."

"Look lively mate! Treasure Fleets are on the patrol!"

"Thought I'd remind you, Peddler merchants offer brand new clothes on the first of every month."

"Have you noticed gunsmiths have more weapons these days?"

"Got yer hands on any of them new daggers, mate?"

"Talk of throwing knives are on everyone's lips - you found one yet?"

"Hello mate, be wary of these new daggers. Deadly things they are."

"A whole new set of daggers have made their way to the islands."

"Don't stand here chattin' with me, get yourself some throwin' knives!"

"Rumor has it that some throwing knives can be purchased from shops."

"Heard about those new daggers? Rumors has it they once belonged to assassins."

"I hear ye can get a throwin' knife by defeatin' undead types."

"Truth is mate, if ye wants some throwing knives or daggers, defeat the Undead."

"Keep a look out for those throwing knives! Their good for fightin' the undead."

"Truth about Raven's Cove, watch you back and your front, but mostly your soul."

"There's an evil at Raven's Cove that even the most bloodthristy pirates fear."

"You say you don't scare easily, but you've never ventured into Raven's Cove at night."

"Curious why it's called Raven's Cove, know a tad bit about omens?"

"The forces of evil at Raven's Cove may play a game of tug-of-war with your immortal soul."

"Set foot upon Raven's Cove and it may be the last step you take."

"I'm not sure the weapons you'll need to survive Raven's Cove... or if any will do."

"I hear sailors telling tales of a mysterious island."

"Gold's worthless at Raven's Cove... unless you encounter a greedy ghost."

"I scrubbed my hands of the rumors surrounding Raven's Cove... but they tend to be true."

"I've heard of phantoms at Raven's Cove. Night ones more fierce than day ones."

"If you're headed to Raven's Cove, sharpen your weapons 'cause negotiatin' won't help there."

"Many eyed Raven's Cove seeking fortune', but all they found was death."

"'There's an evil at Raven's Cove that even the most bloodthirsty pirates fear."

"Dare to go to Raven's Cove while it's day, for nightfall brings untold terror."

"I hear ye can get a throwing knife by defeating undead types."

"Why're you standing there when you could be making potions?"

"Ahoy there - have you learned to repair ships yet?"

"I heard there are many types of fish for catching. Keep casting 'til you land the biggest and the best!"

"If I had my sea-legs back, first think I'd do is buy a fishing boat!"

"Legendary fish are ready to be caught, be only by someone's who's fishing reputation is high."

"Fishing's fun mate. Try your hand on the docks of Padres, Port Royal or Tortuga."

"Need something to do? try fishing at the end of the Port Royal, Tortuga and Padres docks!"

"Rumor has it that loot can be found in the belly of fish some Pirates are catching."

"Wanna try out fishing? Ask the Fishmasters and they'll give you a rod and lure!"

"Look lively mate! Get down to the docks of Tortuga, Padres and Port Royal for some fishing!'"

"Been fishing? Caught anything? if not try it again. It gets easier, trust me."

"Fishmasters can tell a whale of a tale about some of them 'Legendary' fish so go ask them!"

"Tired of fishing from the docks? I hear you can actually buy a fishing boat."

"I pray for the day the red spirits disappear."

"You may soon be askin' yerself why you came to this place."

"I pray you know the terros involved here."

"Welcome to the scariest place on earth, matey!"

"Truth be told, it may be too late for your fate to be altered."

"Few have lived to tell the tale of Raven's Cove."

"Life is cruel...and you've yet to see all of Raven's Cove."

"There be much unfinished business here on Raven's Cove."

"Ever have your soul haggled over?"

"Pssst, mate. Every square inch of Raven's Cove is haunted."

"Say, mate, nights around here can be murder...and then some."

"It may be too late to decide friend or foe."

"You may soon wonder if you're among the living or the dead or both!"

"You may soon be wishin' you're back from whence you came."

"I be thinkin' you may be harboring a death wish, mate."

"Word to the wise, when the sun goes down...don't be around."

"Keep a keen eye on your soul here at Raven's Cove friend."

"Beware the Skeleton poker game, chances are it's fixed."

"Pity us. We bet our lives in a game with Jolly Roger's men and lost."

"There are no longer fish for my fellow fishermen to catch."

"With Jolly's curse there were no fish and the townsfolk all starved."

"I have found power in potions and you may too."

"My voodoo defense against Jolly Roger came too late."

"Voodoo is a risky bet against Jolly Roger's horrors."

"I weep for the poor souls who met their fate on account of me."

"I curse the day I was forced to sew sails for Jolly Roger's ships."

"My soul won't rest until I make amends to those who perished."

"This house is nice and all, but I'm dead for goodness sake."

"I hate the fact that I died in the best of health and wealth."

"I lost something here I hope you can help me find. My life!"

"Being dead can sure be a bore around here."

"Is there any way to bring me back to life, mate?"

"Away mortal! Yee not be wanted here!"

"Booo! Booo! Or I'll smite yee with my ghostly powers!"

"The red spirits are after us all!"

While on Raven's Cove Story Quest

"Away mortal! Yee have work to do!"

"There's no battle yet! Come back when there's a use for you."

"We'll need recruits if you are interested. Check back with me soon."

"He'll regret the day he crossed me! The islands will be mine!"

Retrieved from "https://piratesonline.fandom.com/wiki/NPC_Quotes?oldid=338016"
Community content is available under CC-BY-SA unless otherwise noted.