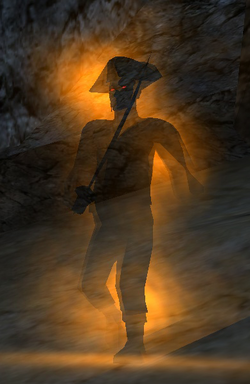 Mutineer Ghosts are one of the types of hostile ghosts that inhabit El Patron's Mine and the Cave of Lost Souls.

Supposedly, they were once part of El Patron's crew, but they committed a mutiny against their captain and were trapped forever in the mine. Unlike Rage Ghosts, they seem to have retained some of their humanity and deal a considerably lower amount of damage.

They appear as black shadowed outlines but can sometimes be seen as silhouettes of their former selves.

They use cutlasses in battle and can be found at levels 33-40, with health ranging from 3,050 to 3,750. They can use a number of deadly skills, including Blade Storm.

Retrieved from "https://piratesonline.fandom.com/wiki/Mutineer_Ghost?oldid=333189"
Community content is available under CC-BY-SA unless otherwise noted.