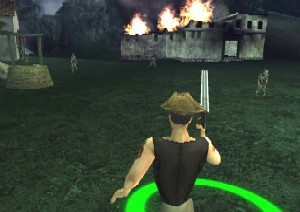 This burning ruin of a village on Tortuga is all that is left of a once thriving small community and now called the Rat's Nest.

Formerly, this tiny hamlet was home to a group of hard-working settlers who did not desire to live a pirate's existence - yet they were always friendly to any buccaneer who passed through. They simply wanted to create a life of their own on their haven island.

However, Jolly Roger was seeking a foothold to conquer Tortuga and thought Minertown would be a weak link.

He approached a town elder, a bitter selfish man named Captain Ezekiel Rott. Roger promised Rott eternal life for his help and Rott was happy to oblige. Rott tricked all the pirates into not defending the town claiming that Jolly was not going to invade. Jolly sacked the town, turning the innocent citizens into more servants for his undead army and left General Sandspine in charge. Luckily the gypsies had buried voodoo relics in Tortuga meaning Jolly could not invade the rest of the island.

Retrieved from "https://piratesonline.fandom.com/wiki/Minertown?oldid=324335"
Community content is available under CC-BY-SA unless otherwise noted.