Mala Uva is a random Spanish Undead Bandido Boss, appearing at Levels 15-20. He uses Dual Cutlasses and can do heavy damage, ranking as a threat to lower level pirates who stumble upon him.

He has been known to appear at Cutthroat Isle, Lava Gorge in Padres Del Fuego, and on Flagships in the High Seas. 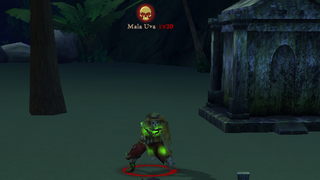 Retrieved from "https://piratesonline.fandom.com/wiki/Mala_Uva?oldid=332676"
Community content is available under CC-BY-SA unless otherwise noted.