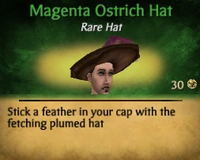 The Magenta Ostrich Hat is a unique hat that can only be obtained during the Raven's Cove Story Quest (available at notoriety level 30) by earning the bonus quest playing Undead Poker for the friendly Clubheart ghosts. Once you sell or trash this hard-earned hat, there is no way of getting it back.

Obtaining it requires the completion of a difficult task: winning 5,000 gold in Undead Poker in one sitting. This means you cannot leave the table or die without losing your progress. If you finish the quest without completing this optional objective, you can only acquire the hat later at a Quest Reward Vendor.

Game Tip: You should get a friend to heal you while you are playing Undead Poker so that you don't die! (Make sure he/she attunes you before sitting down or it won't work.)

Retrieved from "https://piratesonline.fandom.com/wiki/Magenta_Ostrich_Hat?oldid=342593"
Community content is available under CC-BY-SA unless otherwise noted.