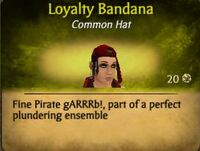 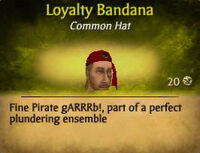 The Loyalty Bandana was free for unlimited access members from November 27, 2008 to December 7, 2008. It was available at any of the tailors on any the main islands.

Retrieved from "https://piratesonline.fandom.com/wiki/Loyalty_Bandana?oldid=336290"
Community content is available under CC-BY-SA unless otherwise noted.