The Lost Sword of El Patron is the very same weapon used by El Patron himself. Following his death, his sword was presumed lost forever. However, it was rediscovered among the other weapons in El Patron's collection. The blade itself seems to be made of gold. As a result, there is a brilliant gold trail behind each of this sword's attacks.

This Legendary Cutlass is powerful. It gives its lucky wielder the ability to change into a ghost-like form for 12 seconds, which prevents half damage from ranged and combat attacks. Additionally -- although not stated on the weapon's skill description -- this skill gives the user a 20% damage buff while Ghost Form is active.

The name "El Patron" appeared with the Treasure Fleet update. It said in a notice for the Fleets that the EITC were planning to escape with his Lost Weapons.

With the release of the Loot and Inventory system, the POTCO team talked of the weapon being out there - "According to legend, El Patron cursed the sword with his dying breath. Now his spirit haunts the blade and its user. When the user unsheathes the sword, they travel as a phantom wherever they go." 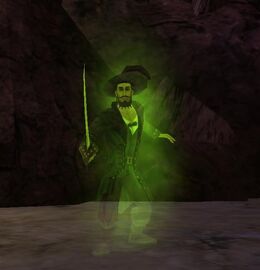 Retrieved from "https://piratesonline.fandom.com/wiki/Lost_Sword_of_El_Patron?oldid=342190"
Community content is available under CC-BY-SA unless otherwise noted.