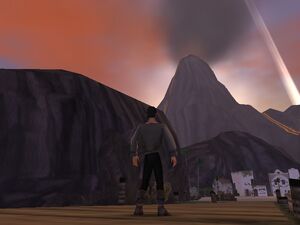 Most of the town was spared the wrath of the volcano, but parts of destroyed buildings and bridges are evident. However, the good people are chosing to stick it out - even with the Padres del Fuego ("Father of Fire") volcano still quite active.

Like the populated areas on Port Royal and Tortuga, Los Padres has taverns and various merchants, as well as a jail to toss unwanted riff-raff.

The town itself has no enemies to speak of, unless the pirate wanders too close to Fort Dundee. But, it does have access to a fort, the Lava Gorge and Beckett's Quarry. If you travel through the caves and jungles you will come to Los Padres's counterpart, Las Pulgas, which has been overrun by undead. Some shopkeepers and merchants still have the guts to keep their shops open there, although they get few customers.

Retrieved from "https://piratesonline.fandom.com/wiki/Los_Padres?oldid=322610"
Community content is available under CC-BY-SA unless otherwise noted.