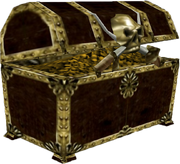 Loot Skull Chests are randomly rewarded after defeating an enemy. These chests may contain anywhere from 1-6 items. The Loot inside can vary from gold, ammo and cards, to clothes and new weapons- even the Lost Weapons. Often the items in a Skull Chest are (typically) more valuable than those found in a Loot Pouch or regular Loot Chest. It is common for them to have large amounts of gold in them and better weapons. There is also a chance to get a loot skull chest by sinking ships at sea.

Loot skull chests can appear on both land and at sea! When plundering ships, the loot skull chest will appear as a small grey chest in the ships hull and has the same chance at more valuable items as its land lubbing counterpart. Increasing the captain's treasure sense, will improve the crews chances to find a loot skull chest in plunder.

To pick up the Loot Skull Chest, simply approach it and press the Shift key. A contents window will appear. The pirate can then pick and choose what they want or select 'Take It All', which as the name suggests allows the pirate to take everything.

The chest will remain until all pirates who helped defeat the enemy have collected their items or time expires. If a pirate has found an item and has no room to store it, they will be unable to take that item - unless another item is cleared out the inventory. There is no guarantee that a Loot Skull Chest will produce an exceptional weapon. Should the items in the chest not be taken, it will disappear after 1 minute, like all loot containers do. Sometimes it is followed by some rising stars.

Game Note: Loot Skull Chests will always have a loot rating of 3. 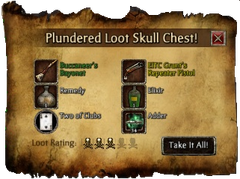 Retrieved from "https://piratesonline.fandom.com/wiki/Loot_Skull_Chest?oldid=324264"
Community content is available under CC-BY-SA unless otherwise noted.