Loot or plunder consists of objects (weapons, clothes, ammunition, gold, tonics, etc.) that might be dropped by a pirate's enemy or enemy ship. These items are then available to be picked up after the battle.

After defeating an enemy, the pirate may be rewarded with either:

There are also loot drops you get from Cannon Defense, Fishing, Sailing and in the El Patron Boss Battle.

They will contain a number of items that can be added to the player's inventory. Loot Chests will usually contain higher quality items compared to pouches, while Skull Chests contain the best and rarest items.

The pirate can select which looted items to take or leave - or click "Take It All!". Select individual items by either double-clicking on them OR by dragging them to your inventory. Click the Red X once you're done taking your pick of the rewards.

If your pirate's inventory is full of a particular type of item, the new item will remain in the loot container. The pirate will then either have to make room for the item by deleting something else, or leave it behind.

Loot containers sport a skull Loot Rating to indicate an overall quality of the items found, ranging from 1-5 Skulls & Crossbones.

In the The Legend of Pirates Online, as part of their Twelve Days Celebration event for 2019, TLOPO introduced three new "winter" variants of loot. In 2020, Haunted versions were introduced for the Hollowed Woods event.

These special containers take the place of normal loot during the Winter and Halloween events, and while they had all new looks and sound effects, they hold the same contents as the normal containers and provided no improvement on loot found. This was a purely cosmetic change for the duration the event. 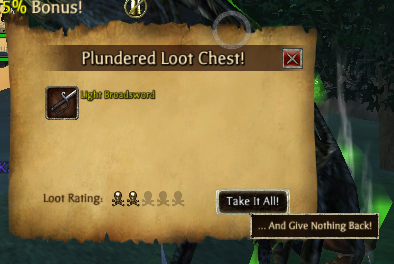