Leviathan's Curse is lethally powerful weapon skill, currently only found in the Lost Blade of Leviathan, which has the Maximum skill at Rank 5. It is said to allow anyone who wields such a monstrous blade to unleash a powerful curse. The skill recharges every 60 seconds [39 seconds if you have Finesse rank 5] and deals 5,000 to 10,000 damage to nearby enemies. The animation of the skill is identical to Power Slash and has a AOE [area of effect] that is comparable to Siege Charge. 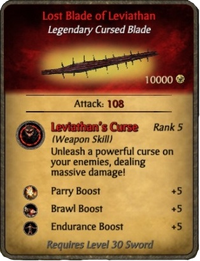 Retrieved from "https://piratesonline.fandom.com/wiki/Leviathan%27s_Curse?oldid=336733"
Community content is available under CC-BY-SA unless otherwise noted.