Legendary Fish are the sea creatures spoken of in whispers across the bar tables by veteran fishermen. Despite the rule of "The One That Got Away", the legends and stories about these majestic creatures are not exaggerated in the slightest. A pirate who reaches level 20 in fishing may seek out these beings and try to capture them, retrieving one of their scales as a trophy. There are five different Legendary Fish roaming the Caribbean, and each scale is worth a pretty penny. You can also find Famed items from these monsters.

This prehistoric fish is said to only appear when the fog grows thick, and is supposedly recognized by its glowing red eyes ( its suspended red anglers). Fogbell does a LOT of Struggling compared to the other legends, but once you can reel him in to about 25-35ft - you should be able to land him. This fish is said to be very fierce and strong in the Fishmaster's stories, on one account he even bites a ship in half! His scales are worth 1,000 gold. 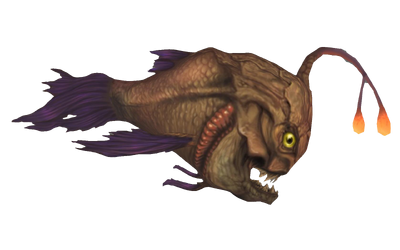 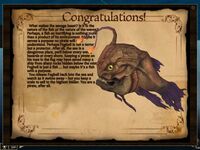 Speedy Lou is said to be the fastest fish in the Caribbean, able to out swim even the fastest ships. This speed of his comes into play when he tries to flee from fishermen. When you have to Catch the spinning reel - it turns MUCH faster when it's speedy Lou trying to flee than any other. Be quick or he will either gain ground on you, or get away entirely. However, he does not struggle too hard, making him the most common legendary fish to catch. He can be found throughout the Caribbean, from uncharted waters to populated passages. Speedy's scales pay about 600 to 2,000 gold every time he is caught.

According to legend, Glittering Girl travels the seven seas and rescues lost sailors, in memory of her lost love. She doesn't struggle much, but pulses eerily with light to try and distract the fisherman attempting to catch her. She is usually found around Raven's Cove and Port Royal, but can be found almost anywhere in the Caribbean. Her scales are worth 1,000 gold. 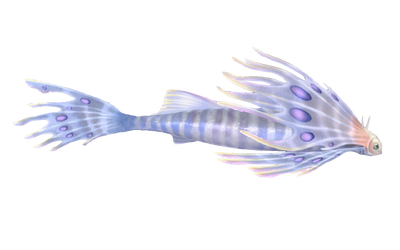 This gigantic fish is so slow and easy-going that seaweed, barnacles and even a treasure chest and a few shipwreck parts have accumulated on its back. He is absolutely huge, and usually hangs out between Tortuga and Devil's Anvil and the Privateering arena, but can also be found almost anywhere. He is the fattest fish to ever roam the Caribbean. Mossy's size makes him easy to hold onto, but he takes much longer to wear out and bring in. You can haul some fish up at 30ft or even 50ft, but you have to reel Mossy all the way in to 0 ft. So, be prepared for a long fight. Many pirates find the struggle stage of this fish very tough so be warned. Mossy's scales pay 1,500 gold when you bring him inland.

This ancient, mythical creature is said to be older than the world itself. According to legend, it was born from a conflict between a water god and a fire god. This legendary fish can be found near Padres Del Fuego during dusk (otherwise known as evening) in game. He can also be found anywhere else, though it is not as likely. Most pirates say that Fire Dragon is the hardest fish to land in the entire Caribbean. He struggles hard, resists reeling and you have to catch the reel several times with him. In need of gold? Fire Dragon's scales are a rewarding 2,000 gold pieces.

Remember: it is the most powerful legendary fish in the game. The trouble isn't really finding the fish, it's reeling the fish in. 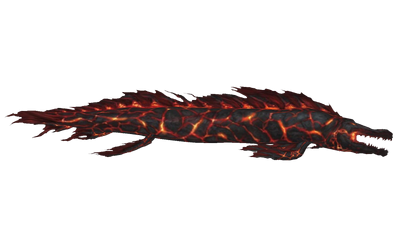 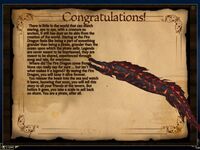 Retrieved from "https://piratesonline.fandom.com/wiki/Legendary_Fish?oldid=328631"
Community content is available under CC-BY-SA unless otherwise noted.