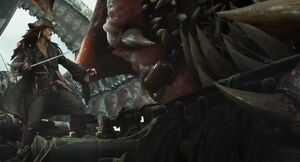 The Kraken is a monstrous creature resembling a titanic squid, over 1,000 feet in length. According to Gibbs it is the size of 3 huge boats. It once served Davy Jones, who used it to destroy his enemies. If a sailor had Jones' notorious Black Spot upon him, the Kraken would pursue that man to ends of the Earth - and pray he not get too close to open water. The creature does not appear in the game, but was seen in the trailer.

This beastie attacks with massive one-hundred foot long tentacles that can sweep a man out to sea, to either drown or become a meal.

The primary goal for Jack Sparrow in the 2nd film was the Dead Man's Chest, which contained the still-beating heart of Davy Jones. By blackmailing Jones, Sparrow was hoping to stave off his fate at Davy's hands or the Kraken's tentacles.

In pursuit of Sparrow and also Will Turner, the Kraken's power was fully displayed and it also destroyed the Edinburgh Trader.

Later, after recovering the chest at Isla Cruces, Davy sent the deadly beast to impend horror on the Black Pearl. Despite valiant efforts of her crew using the ship's cannons and a bomb made of black powder and rum kegs, the Kraken still was too powerful to stop.

In the end, Captain Jack stood alone on the deck of his beloved ship - facing the massive, tooth-filled maw of the creature before it swallowed him whole and dragged the vessel to the bottom.

With Davy Jones' heart in his possession, Cutler Beckett used the powerful monster to slaughter pirate vessels that stood against him in his War on Piracy. Between the blazing guns of the Flying Dutchman and the beast's mammoth tentacles, no ship stood a chance.

However, at some point, Beckett must have feared that the Kraken could be used against him and ordered it destroyed. It's unknown exactly how the deed was done, but the Kraken's titanic corpse was discovered on a beach of a place known as Black Sand Beach by the Black Pearl's crew. The mighty creature had been felled.

With the recent update to Raven's Cove, after you complete the Raven's Cove Story Quest, you gain not only a Cursed Blade, but you gain the new emote, Check Hand. The new emote says, "Your hand does not look like it contains an Evil Curse of Doom ." It is unknown what Disney's final intention for this Curse was. Would using a Cursed Blade attract the Kraken?

It seems that developers were working on the kraken, but it will obviously take time for it to make an appearance.

These pictures show the design of the creature so many players can't wait to fight.

The Kraken can also be seen in the game trailer attacking a war frigate with its tentacles.

At E3 (Electronic Entertainment Expo) 2006 players were able to fight off the kraken from their ship. 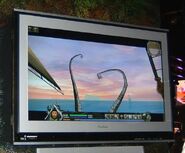 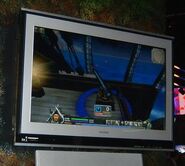 In the older Developer Diaries, it was announced that the Kraken will not be an open sea monster battle, but scheduled to be a coming Boss Battle.

Play as the Kraken 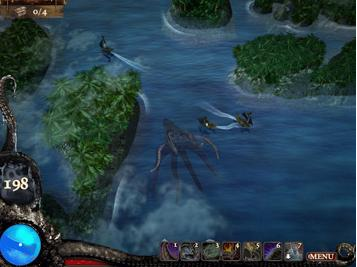 Unlimited players have (during January 2010, it is now over and you can't get this game) the opportunity to play as the legendary beastie itself in a new game: "Pirates of the Caribbean: Call of the Kraken " for a limited time.

If you beat the game you will get an exclusive kraken tattoo to use in Pirates of the Caribbean Online.