When a pirate's health reaches '0', they fall to the ground and are Knocked Out. The only way to get back up from a knock out is have a pirate revive you.

The Knock Out icon will appear over their heads and a timer will start (the red circle). The pirate can take an option to go directly to jail or wait and hope another pirate revives them before the timer runs out. You are still allowed to chat while knocked out to call for help, if you wish to do so. 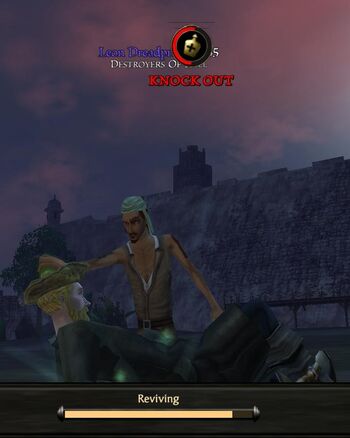 If the timer runs out or if you press the "Go to Jail"  button, the pirate blacks out and wakes up in jail. After exiting the jail cell your pirate will be groggy (Note: Being groggy will not occur for pirates who are level 1-9 and 50). The groggy affect limits your pirate from having full health and lasts for a few minutes. Defeating enemies while groggy lessens the time the groggy affect lasts.

If the pirate is revived, they will not go to jail and they will not be groggy. When a pirate gets knocked out on a flagship and is not revived before his/her crew defeats all enemies on the ship, he/she will be automatically revived when the crew wins and boards their original ship,but if he/she isn't revived he/she will be groggy. (Unless level 1-9 or 50) 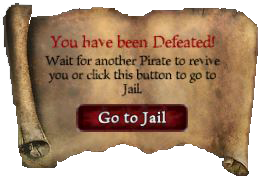 Retrieved from "https://piratesonline.fandom.com/wiki/Knock_Out?oldid=340011"
Community content is available under CC-BY-SA unless otherwise noted.