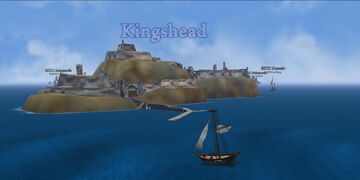 Below is the soundtrack that is played while on Kingshead. 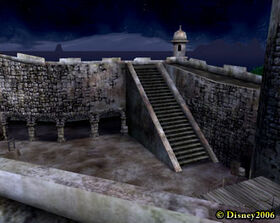 Kingshead is a large, heavily guarded fort in the control of the Royal Navy near Cutthroat Isle, in the southeast. It's a massive complex of turrets and stone walls.

This island has been chosen by Lord Cutler Beckett, the force behind the EITC, to be something of his own personal fortress. It is here that the EITC's less–than–legal doings can be kept secret from prying eyes. Plenty of Navy and EITC guards make the fort difficult to approach –– and even harder to escape from. - Pirates Online Website

This mammoth fortress is the most common place to level grenades, voodoo staff and just about anything else once a player has become proficient - thanks almost entirely to the Marching Ground. When you get there you are on a large dock with a dinghy at the end.

Kingshead is actually one big area, since you can not teleport from one place to another on the island, but for this article the island will be broken into the named locations.

This is first area you enter through the main gate. The marching field is used as an exercise yard for troops to practice their drills and act as a buffer area to protect the more vital areas deeper in the fort.

Not much is here but a few catwalks for the main walls, some haybales and a grove of trees.

But for pirates, this place provides ample opportunity to practice and level weapons.

Pirates could at one time, stand behind the fence rail and throw grenades into the group of soldiers. But, the fence no longer stops enemies from retaliating. So, some pirates still use the same method but must be prepared to face survivors in melee combat.

Tip - Stand in the pop up point before the group re-spawns. They will NOT attack until after your first attack. Use an area effect, like Wither, Cutlass Sweep or Grenade. But, once they line up to fight you, direct line attacks (like the Flaming Skull) can do loads of damage to multiple soldiers or continue to press your grenade attack.

Just beyond the arch at the first entrance is a small yard with a cabin, even has small pigs in pens nearby. There are two recently added structures that look like barracks or jails. This is actually the area for the entrance to a large storeroom, where food and supplies are kept for the fort.

The walled pathway connects the Barracks and the Armory together. A handful of Navy veterans and officers, and a couple of EITC Grunts can be found here. They are guarding the entrance, though once inside, the pirate will be unable to take anything or even search the contents.

It is unknown if this could possibly be part of a future quest, or is just another area for pirates to enjoy.

Up the ramp from the Depot is a small, separate fort area. This is a majority of the soldiers are housed. Several high-level officers are standing around, and numbers veterans are patrolling. It doesn't take much to pull them together for a grenade or voodoo attack. This place is often a good fall back if the lawn is too crowded.

Going up to the hill, there are a lot of EITC and high-level Navy officers just milling about. This is a more dangerous area. It is a good place to get lot of guards attacking you though. Don't venture here too long without company, but a group of players can make a good stand here with little interruptions. This small collection of buildings would function as a town if they weren't dedicated to the making and storing of weapons. It is a rather large area, so make sure you dont back up into a Grunt! There is also a small forest area with a Mercenary and an Assassin. 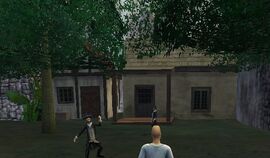 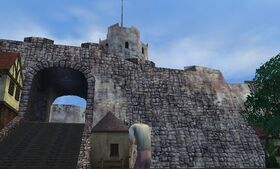 At the far end of the main fort is the hangman's platform and courtyard. There's a jail that you can enter, but is not being used. It is a great spot to go AFK.

It's about the same sculpt as the Barracks, but higher level, and the Jail replaces all the houses. Another collection of high-level EITC and Navy officers cluster here, but not close enough together for explosives or staff.

Good place to do teams for those leveling cutlass, dagger and voodoo doll. Beware! Remington the Vicious is here!

At the very apex of the island is The Keep, another small fortress area with a high vantage point. There is a small building that has no entrance (Commander's quarters?), and no enemies around it.

This is a very dangerous area but it has quite a few good views. There is another hangman's platform and a noose, as well as some hidden passageway with Mercenaries and Assassins, and in the tallest part of Kingshead, the original jail. It still houses an Assassin, but isn't currently being used to lock up pirates defeated in battles. Rather, once you are knocked out, you are teleported to your Port of Call. 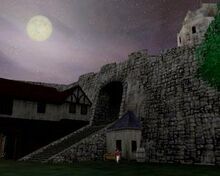