John Moses, also called Innocent John, was the victim of horrible circumstances. Falsely accused of stealing livestock, John was sentenced to hang. His wife Constance made every effort for his release, including contacting his Aunt in England for money to bribe corrupt officials for his release.

However, the money was stolen by Captain Cromwell and John was taken to the gallows. A victim of circumstance, John's soul was taken by Jolly Roger to service in his undead army.

His widow died not longer after of a broken heart and roamed the swamps of Tortuga, where the natives referred to her restless spirit as Constance Sorrow.

Later, after efforts on behalf of numerous pirates to right Cromwell's wrong - John's soul managed to escape the clutches of Jolly Roger's service. Several were witness to an amazing spectacle as the two ghosts reunited in the burned remains of their once happy home. Together again, they made their final journey to the other side. 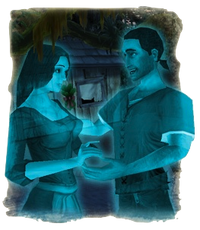 John was seen during the 2011 and 2012 Feats of Strength Competition helping pirates towards their next goal to win the race.

He made an appearance during the 2013 contest as well. Those in attendence say he gave away ship materials for rescuing him from a spell while running around Devil's Anvil.

John was also seen by some people at the 2011 Bretheren Feast.

Retrieved from "https://piratesonline.fandom.com/wiki/John_Moses?oldid=330658"
Community content is available under CC-BY-SA unless otherwise noted.