Jeremy Coldhand is an Undead Grenadier boss in the service of Jolly Roger, who randomly appears in place of regular Undead Grenadiers. He has been spotted mostly on Padres but can appear on Cutthroat Isle slinging explosive grenades at unfortunate pirates. 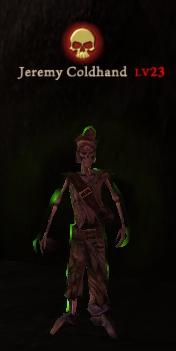 Retrieved from "https://piratesonline.fandom.com/wiki/Jeremy_Coldhand?oldid=332648"
Community content is available under CC-BY-SA unless otherwise noted.