James Howe is a pirate from the Marceline Guild. At this time, little is known about him. His notoriety level is 39. He appeared in the Brethren Feast Weapon Giveaway.

During a past event, Captain Xavier Hench sent out a letter from behind enemy lines to pirates telling that James Howe had been captured, along with Ben Bowman and Catherine Harcourt; after forwarding information about the reasons for the recent increase in invasion activity. The invaders were seeking a single new weapon rumored to give those who wield it added powers over their enemy.

In The Legend of Pirates Online, Howe's Harbor Hangout was added as a Meetup Location for private or public gatherings outside of the regular game area using the Lobby Menu.

James Howe is now the host and bartender at this new establishment. 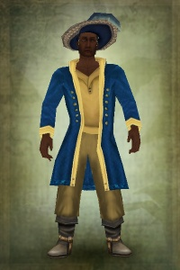 Retrieved from "https://piratesonline.fandom.com/wiki/James_Howe?oldid=340053"
Community content is available under CC-BY-SA unless otherwise noted.