Ahoy mates! James Gleaming here, showing you my ways to the mystic Voodoo Doll. I love healing pirates as well as using mystical powers to curse enemies, and this is how I do it!

Here are a few fundimental things that you must know if you are going to go about with a torture device like a doll:

1. A Spirit Doll is used as the best Doll for healing foes - you get nearly double a heal from a spirit doll compared to any other - if you own any of these dolls, and you want to heal, take them out!

2. Bane and Mojo Dolls should only ever be used for fighting! They are powerful but generate much less of a heal or cure to your friends.

3. Use your voodoo wisely! Don't go for all the high attacks at once, as your voodoo will rapidly decrease. Use a wide range so you can keep attacking!

The Voodoo Doll's powers are fun to use, but as you level and find a new skill, you'll find out it takes much longer to load - so the moral of the story is, don't use all your skill points on Life Drain, Grave Shackles and any other high affecting skill - you'll be bored by the time they take to reload. What's wrong with a poke? 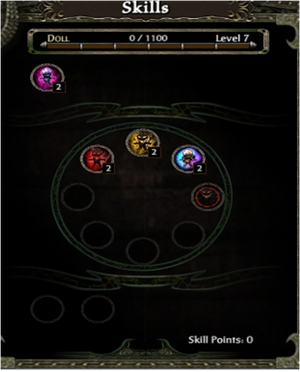 Now, my older brother, Jack Gleaming on his guide to sailing, clearly stated if you want to level sailing, save your skill points. This doesn't matter at all with the Voodoo Doll - yes, it may give more reputation, but you'd get more killed in less time, giving more reputation. So, use your skills wisely!

There is one exception:

You may have just read all of the above text, or just a few snippets, but one thing I would like to point out is that I recommend keeping your Attune Doll skill high, as you can attune more, kill more and gain more reputation as well as well earnt loot. If you keep it at just one, you'll find out you can only kill one enemy at the time. More being hurt = More being killed! (I think you get it now!)

Whenever you are attacking an enemy, never click on the skill you want to use. Using this takes time to get to the specific one with your mouse, when you can just press one simple button at a time.

You will notice that the skills can be used much more quickly and efficiently.

With a doll, you can attack from quite a far radius. If you can use the area to avoid incoming attacks, the chance of you lying down on that floor is far less. As Jack Sparrow said 'We shall fight, to run away!' - Look how succeessful he is now!

The Doll is a wonderful thing. You can heal and attack at the same time! So while your friends are being healed, you can also attack the enemy! So never hesitate about bringing a Voodoo Doll out, it's excellent!

I've been asked many questions about various ways to the Doll. Here are a few of my answers:

Q. Hi James - I've been told to heal so I don't get on Knock Out. Will this still give me my wanted reputation and loot?

A. Healing alone can generate reputation as well as loot.

Q. When I use my doll in a Pvp and got called a noob. Why?

A. Many people believe it's cheating in PvP. Being called a noob is nothing to be ashamed of (Unless you're cheating as a violation against the Policy) - a weapon is a weapon, you can't escape that.

Q. Have you ever got a famed using a doll? Someone said it gives worse loot.

Retrieved from "https://piratesonline.fandom.com/wiki/James_Gleaming%27s_Guide_to_the_Voodoo_Doll?oldid=265597"
Community content is available under CC-BY-SA unless otherwise noted.