Jail is a building where prisoners are taken in Pirates of the Caribbean Online.

The Jail is the location where pirates may find themselves when: 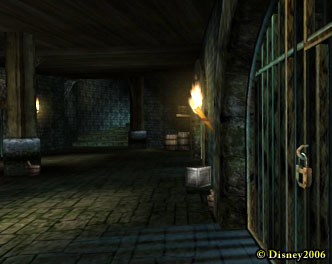 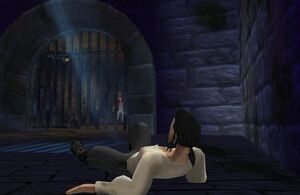 Awakening in jail after being defeated in combat, the pirate will be in a groggy mode, which means that their health and voodoo power will be temporarily shortened. To exit, the player has the ability to break out of Jail by kicking the jail cell door open and escaping. (A trick taught to the pirate by Jack Sparrow).

NOTE: Master pirates and greenhorns at Level 9 or less will NOT be groggy upon awakening.

A typical Jail is a building made out of stone bricks and lit with torches. The jail cells are down in the basement or the basic room of the Jail. It is usually watched over by a sleeping Navy Soldier.

Jails are located on the main islands in the game, usually in a settlement or near a fort.

Game Note - There are actually two jails on Kingshead, the first is around Remington the Vicious and second is at the top of the main fortress - under very heavy guard by an Assassin. 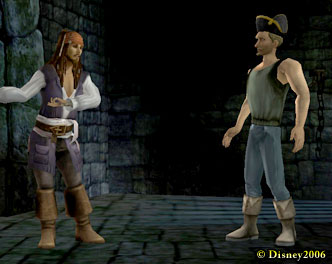 In the beginning of the game players start out in Jail and meet Captain Jack Sparrow, and then customize their pirate characters. Then, Jack helps them escape the Jail to start off the game by getting the Sea Chest. After that, they are on their own.

Retrieved from "https://piratesonline.fandom.com/wiki/Jail?oldid=322514"
Community content is available under CC-BY-SA unless otherwise noted.