Jack Tar is an Undead Mutineer boss that sometimes randomly appears on the islands of Port Royal or Tortuga.

Attacking with a dagger, he may appear at Levels 4-7.

The term 'Jack Tar' is an old Royal Navy and merchant marine term for sailor. Likely due to the tar often used to coat rigging ropes that would get on sailors hands and feet. Also, tar was used to make coats and pants waterproof. 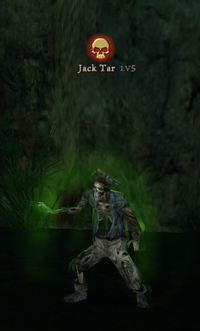 Retrieved from "https://piratesonline.fandom.com/wiki/Jack_Tar?oldid=332401"
Community content is available under CC-BY-SA unless otherwise noted.