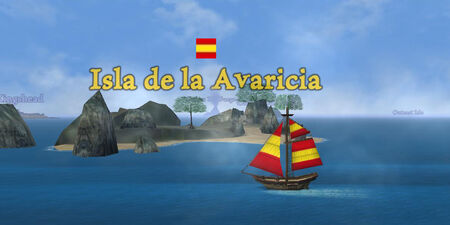 Below is the soundtrack that is played while on Isla De La Avaricia.

Isla de la Avaricia (Island of Greed) is the Spanish stronghold and launching point for ships privateering for Spain under the governorship of Captain Garcia de la Avaricia.

There is a gunsmith, shipwright and tavern on the island to resupply and relax between ship-to-ship battles.

This island only has one area, but otherwise the entire island is made up of the small beach with the Spanish house, the central area having a higher elevation being grassier with more trees, and a few gigantic rocks, with the Avaricia Tavern somewhere nearby. Judging by the length and width of the island, there just be some more to come, especially with Disney unofficially announcing more privateering features.

There are currently no enemies on this island nor on the French privateering island Ile d'Etable de Porc.

Captain Garcia de Avaricia, and the minor characters (see below)

A number of Spanish and privateers working for the Spanish can be found here, on the island and in the tavern. Some are happy to help new privateers learn the ropes.

An introduction to the privateering life comes in the form of some ever-increasingly difficult quests for the pirate. Should you complete them all, you will receive a special reward.

A modern Spanish flag is displayed on this island, instead of the one from the mid 18th century. This is most likely a mistake made by the developers, since the flag used was not flown by Spain until 1770, more than twenty years after the POTC films.