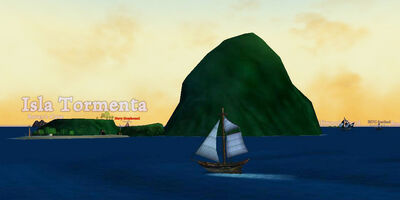 Below is the soundtrack that is played while on Isla Tormenta.

Isla Tormenta ("Storm Island" in Spanish) is a foreboding island between Outcast Isle and Cuba. Tormenta is currently the only home to the crew of The Flying Dutchman, which are some of the most dangerous villains in the game. You'll have to go here to complete the first story chapter. Isla Tormenta is widely known as one of the most dangerous islands in the Caribbean, though many high level pirates go there to level up weapons. Even though their leader Davy Jones is not there, his monstrous crew haunt the caves and the shores of the island.

When you first land on Tormenta, you will arrive on a small beach area where several larger Devourer Crabs stalk. A couple of Dregs and Flotsams guard the entrance into the Cursed Caverns.

Oddly, there's a small cabin around the corner but it appears empty and the pirate will not be able to enter it.

The bowels of the island are mixture of beautiful cascading waterfalls and pools of shallow water, surrounded by living coral and the nightmarish Thrall members of Davy Jones' crew.

Not part of the original Pirates Online, The Legend of Pirates Online added a new area deeper inside the caves beneath the island. This area was modeled after the original Cursed Caverns, but now includes several bosses and a ghostly projection of Davy Jones himself.

Enemies here can get as high as level 50. There are no enemies for levels 1-17, making Tormenta an ill-advised place for players of those levels to visit.

There were originally no bosses on Isla Tormenta, except for a vampire bat boss named Bloodleech who used to be in the original version of Cursed Caverns, then called Tormenta Cave.

The Legend of Pirates Online has added several Thrall bosses, including some unstationary random ones. But here is a list of the stationary bosses and locations.

The numbers "Ex. (1)" after an item is the location on the island where to find that item.

Isla Tormenta and Raven's Cove appear to be the only areas where you can find a Cursed Blade, after completing the Raven's Cove Story Quest, making it very famous among higher level pirates.