Below is the music played during invasions.

Invasions are a game feature as Jolly Roger is now laying on a full harsh assault on the settled islands of the Caribbean in his rampage to conquer all that he sought to rule once. They were added to the game in October 2009.

During the Casa de Muertos quests, the pirates have unwittingly destroyed a magical form of protection for the capital island of Port Royal. And now, the people find themselves facing unmerciful attack from Jolly Roger and his growing number of Undead minions! 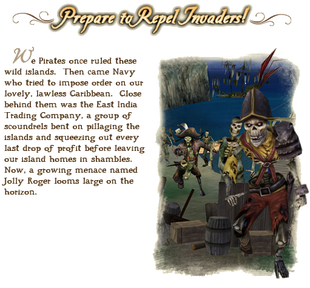 "We fought the EITC at the Battle of Padres. Lead by the infamous Marceline Guild, we managed to hand them a serious defeat. Their Commander, Lord Cutler Beckett, sent in his elite Black Guard troops to jail the ringleaders of the rebellion. As Pirates, we forgot our differences and banded together to fight off the Black Guard. But during our encounter with them it was obvious we could do the Black Guard no real harm. The gypsies and soothsayers heard rumors that confirmed what most of us suspected; the EITC were immune from our steel due to voodoo magic! Seems that Lord Cutler and Jolly Roger were working together! Jolly now has what he wants - a willing partner and access to land." - Pirates Online website

The members of the mysterious guild led by Captain Ezekiel Rott, instructed the pirates to dig up numerous voodoo items from around the island while also sabotaging the Royal Navy ships and soldiers that provided safe haven for the citizens.

Recently, Rott has offered pirates the chance to join Jolly Roger or face the wrath of the Powder Keg Runners!

But, also frightful are the assaults occurring on Padres del Fuego and Tortuga. 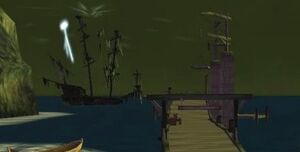 As Jolly's ghost ship nears, a warning will go out of the impending invasion and pirates have a choice to either flee or stand and fight! A countdown will commence until the attack begins. Initially, pirates have 30 minutes to go to or flee the location being invaded by Jolly Roger's minions.

Then, his ghostly warship - the Harkaway - appears on the horizon as the brave souls who remain erect makeshift barricades. Only the buccaneers stand between them and assured destruction.

In moments - Jolly Roger orders the assault and his minions will emerge from the sea on their merciless march.

On the capital island, Jolly's target is the Governor's Mansion. He thinks it will destroy all navy resistance. His minions will make efforts to clear a path to the house before Jolly himself charges in. Pirates have numerous barricades to defend (Wharf, Beach, Farmer's Row, Old Town, Bridge, and the Mansion)

"Powerful relics buried around Port Royal had kept Jolly off dry land. That changed when a number of unsuspecting Pirates, swayed by a desire for easy gold, delivered the relics into the hands of the mysterious Casa de Muertos clan. With the relics gone, Jolly could invade Port Royal at any time! He’s already re-crafted the caves and turned them into training grounds for his troops, who grow in strength and numbers each day. We too must grow in strength, courage, and numbers if we’re to defeat Jolly and keep him from his ultimate goal – ruling the Caribbean with a bony, iron fist! Word is that Jolly’s got his eye on the Governor’s Mansion, certain that if he destroys it all resistance will crumble. We cannot let this happen, mates!! Band together with Jack Sparrow and all us Pirates to keep Port Royal from falling to Jolly’s undead army. If we don’t stop them now, the other islands may fall next!"

Game Note: When the invasion starts all Navy Cadets and all Undead Gravediggers will disappear from view. However one lonely Navy Cadet will appear standing next to the entrance of the graveyard. 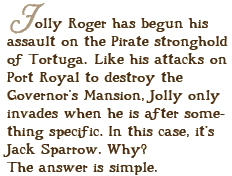 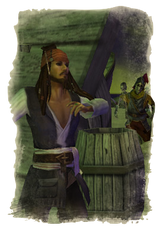 It was Jack's trickery that caused Jolly to be cursed in the first place! Jack's been laying low and conspiring with other Pirates - helping them beef up their confidence and grenade skills. With cunning and double-dealing, Jack had hoped to weaken Jolly Roger's army. But that is not to be. Jolly only grew stronger. Now Jack must evade not only the Navy and EITC, but Jolly as well, who won't rest until he gets his revenge. But there's another reason Jolly wants Jack in his bony grasp. He assumes that once Jack is defeated, the Pirates will abandon the islands for safer waters. - from the Pirates Online website 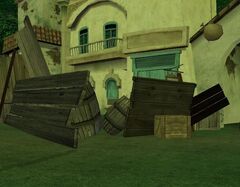 The Faithful Bride, favored haunt of Jack Sparrow, is the goal this time.

There are fewer barricades and Jolly's forces don't have as far to travel to their target - so the pirate's efforts must be greater to fend him off. To make matters worse, they may take shortcuts to start much farther inland. 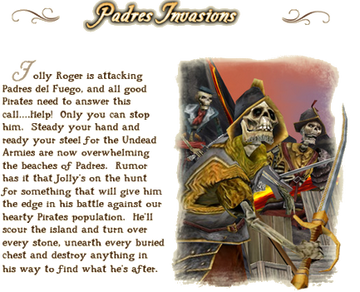 "Some say he's searching for powerful potions that will help him curse the whole of the Caribbean. Others say it's a mythical treasure trove of weapons But, not just any weapons, the very ones left behind by ill-fated Spanish Conquistadors many moons ago. Jolly Roger has his sights fixed on Padres and will not give up until he finds what he wants - and we must stop him! Regardless of what Jolly Roger is after, all good Pirates must join the fray and beat his army back. If not, Jolly's army will surely trample Padres to dust beneath their bony feet." - Pirates Online.

Captain Walter of the Marceline Guild had discovered that Jolly's next target was the volcanic island of Padres and he is marching to the Center of Town. The reason behind this appears to be that the island was being used as a weapons cache and Jolly fully plans on either capturing them or making sure the pirates cannot use them against him. John Moses, the pirate freed from Jolly Roger's grasp, claimed that one Aztec sword was stolen from his farm by the evil Captain Ezekiel Rott, who delivered it to Jolly Roger.

The battle is almost nightmarish as the foes will come wave after wave! Jolly himself leads the charge against the pirates! And to add to the devil's army, the lag can cause the game to go at very slow speeds. 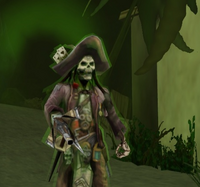 In the midst of all these Brigades a new enemy called Powder Keg Runners also appear in many waves. These potent suicide bombers can appear randomly or arrive in a large group.

Undead bosses can appear during invasions.

Jolly Roger is not to be underestimated! He attacks with numerous voodoo hexes:

If the pirates prevail, they will be rewarded for their valiant efforts. 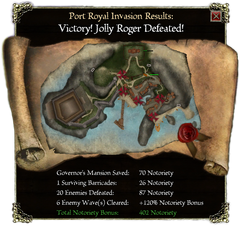 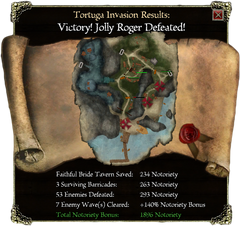 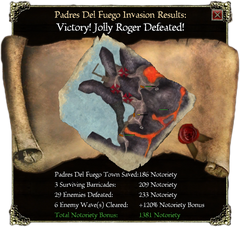 Should they fail... the mansion, the Faithful Bride tavern or the center of Padres will burn, and you are still rewarded for your efforts, just not as generously. The more enemies you defeat and the more barricades that are saved, the higher reputation you will receive. 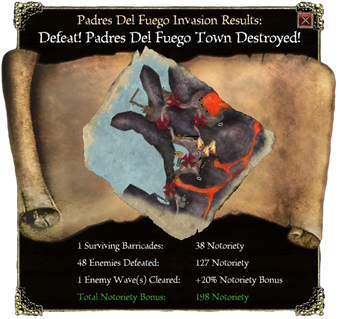 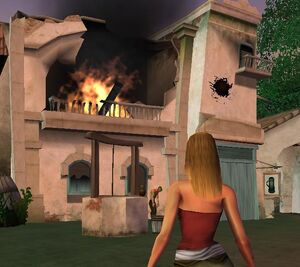 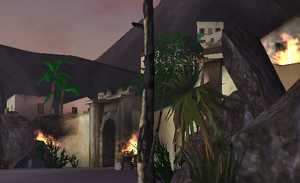 After the eventual Battle of Raven Cove, the legendary stash of weapons was found, and thus the EITC turned its attention to these, breaking its alliance with Jolly. Nowadays invasions have become more rare and less destructive. However, this might not last, mates! Tia Dalma has seen that Jolly is having a change of plans... now invasions will be more destructive and random!

Invasions have become a permanent feature of the game. It is unknown what part they will play in the story, especially with the continuation of the Padres Invasions story, with Cutler Beckett having launched his Expedition Fleets to find El Patron's Lost Weapons, which have been found after the Battle at Raven's Cove.