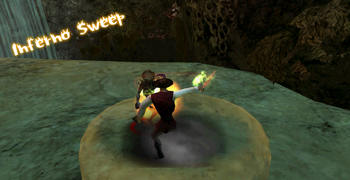 Inferno Sweep is a special and powerful skill found on the unique Legendary Blade of the Abyss and The Ruby Curse. This Break Attack will release a wave of cursed burning flames to smite your enemies and burn them to ash! It is similar to the Cursed Fire ability, but in a sweep! The shock spreads an orange wave around your pirate that burns nearby enemies with cursed fire for 10 seconds! The attack usually does between 920 and 1050 damage.

Weapons with this Ability 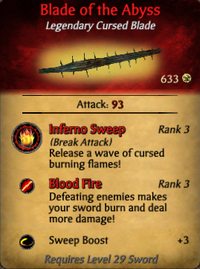 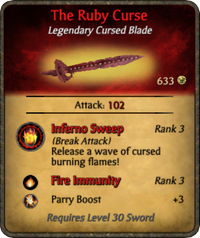 Retrieved from "https://piratesonline.fandom.com/wiki/Inferno_Sweep?oldid=329277"
Community content is available under CC-BY-SA unless otherwise noted.