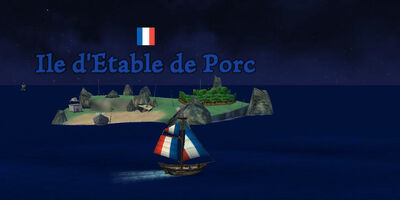 Below is the soundtrack that is played while on Ile D'Etable De Porc.

Ile D'Etable De Porc (Porc's Stable Island) is the French Privateer stronghold island in SvS. The island is fairly small, with only a shipwright, a gunsmith, a tavern, and a few NPC French privateer characters. The island's name in English roughly means "Island of Pork Shed."

The main building is the headquarters of French Captain Pierre le Porc. Pirates can come here to finish the Ship PvP quests or to challenge other pirates working for the Spanish.

This island only has one area, but the settlement is spread out across the beach and up onto a hill, where lies Porc's Tavern. In The Legend of Pirates Online, the Golden Horizon Memorial obelisk was erected and overlooks the Caribbean. This statute was placed to honor pirates who had since passed on.

There are currently no enemies on this island nor on Isla De La Avaricia.

A collection of French nationals and privateers working for the French can be found around the island and in the tavern. Some of them are very happy to offer advice to beginning privateers, while others just want to get away from the confrontation at sea.

Pirates can travel to the island as part of a Quest to learn how to be a privateer. For their efforts they will receive a special reward.

A modern French flag is displayed on the island, instead of the one from the 18th century. This is most likely a mistake made by the developers, since the flag used was not flown by France until 1789, almost forty years after the events of the POTC films.