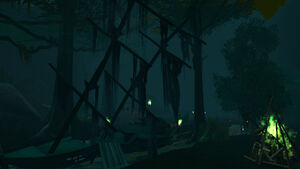 Hollowed Woods is a new area in The Legend of Pirates Online located on Port Royal within King's Run. It is said to be haunted by unknown means. What used to be a bustling mining village is now a dark eerie forest accompanied by Jolly Roger's minions hibernating in the area. This area was released on October 31, 2017 packed with a brand new quest and over 50 brand new items as a big Halloween update.

Emerging from the cave entrance, you step in a village overrun by Jumbees, various undead, as well as ghosts of former residents and several new bosses. There are a few scattered run-down buildings, and a large, broken ship hull dominates the center of town. A fenced-in cemetery, a waterfall, and the mysterious Watcher's Hovel lie beyond.

Below is the soundtrack exclusive to the Hollowed Woods.

Hollowed Woods is also unique in that pirates can only enter them between Halloween and New Year's Eve. The rest of the year, the entrance remains blocked.

The Hollowed Woods was founded as a village not long after the Island Destructions, the violent quakes and tumults that changed Port Royal forever. Fearing future calamity and the onslaughts of Jolly Roger's Invasions, many colonists thought it safer to move farther inland. And several of them founded the town not far beyond the King's Run. But, what they didn't know at the time was the forests were home to The Watcher, an ancient and mostly benevolent spirit. However, she did not too kindly to so many outsiders plowing up her land, chopping down her trees or mining deep into the ground she looked after.

In time, she lashed out at the villagers. Crops withered, animals grew sick and the miners found little resources of value. And some of the colonists began to vacate back to the main settlements.

Not long after, Captain Windshadow arrived. A mysterious man who heard word of a powerful entity living within the forest and he came seeking it's source. Though this stranger had come with a crew of Jumbees, he soon won the remaining villagers over to helping him. They erected a new Town Hall as well.

But, no one knew what Windshadow was up to. He had built the Town Hall to keep people from prying as he and the Jumbees dug into the Earth looking for The Watcher's shrine - the source of her power. When they weren't making fast enough progress, he performed dark voodoo rites to grow the gemstones in the cavern walls. He knew they would attract a larger workforce to aid in his efforts.

One day, the Jumbees broke through into her shrine. Windshadow had crafted The Storm Sphere to drain the powerful energies for him to control. The Watcher's wrath and desperation to save herself was quick and merciless.

In the chaos that followed, the gypsies feared The Watcher's anger and Windshadow escaping with her power. They decided to seal off the village to prevent further spread of the dark magic. Then, April May ran to the mines to save the workers and try and seal off the mineshafts while Myrna managed to seal Windshadow up inside his Town Hall. Their efforts were successful but both gypsies died in the conflagration of voodoo magic and devastation.

Years later, Jolly Roger's army have found their way here and penetrated the waning magical barricades. He has resurrected Undead Skeletons from the cemetery and even the Jumbee members of Windshadow's crew. The ghosts of the townspeople still haunt here, too. They hope that someone can stop Jolly and his plan to unleash Windshadow from his prison which would add to his own power.

Beginning October 31st, pirates of any level can visit Anne Goldsilver on Port Royal to begin a brand new quest titled "A Haunting in Hollowed Woods". During this time, Anne can be found near a pile of hay bales and pumpkins across from the entrance to the jail and cemetery. Anne will start the pirate on the new quest to help her and Richard Silveredge recover their lost memories.

This quest itself involves finding clues to their identities and the secrets of Hollowed Woods, which entails fighting creatures, finding lost objects, making potions, winning hands of deadly Undead Poker and culminating in a showdown with the evil force that haunts the village.

In 2019, a new quest was added. Storms in Hollowed Woods follows an upgrade to the area which overhauled the layout of the town, added new items and enemies.

In this new quest, the pirate must uncover the secrets of the Hollowed Woods Town Hall and a very powerful new enemy: Captain Windshadow.

There are a number of creatures stalking these woods; including Jolly Roger's minions and zombified former residents and ship crew.

Before the "Hollowed Woods" was announced, a ghost Game Master event occurred sometime at King's Run where pirates met friendly ghosts in need of help. The GMs then mysteriously disappeared at the hands of an unknown murderer, and the event ended with TLOPO staff confirming that the event was in preparation for something big.

In an update on Friday the 13th when the Curse of the Muertos Moon was initiated, the cave itself was revealed but could not be entered. Players that tried to glitch in order to enter the cave would be stuck on a loading screen. Three new bone materials were also revealed in the Materials Pouch, which was later confirmed to be related to Hollowed Woods.

Before Hollowed Woods was officially opened, three teasers were revealed on The Legend of Pirates Online's Instagram account. On October 22, 2017, a teaser YouTube video was released.

NOTE: All permanent bosses here respawn with the same level and look every time.