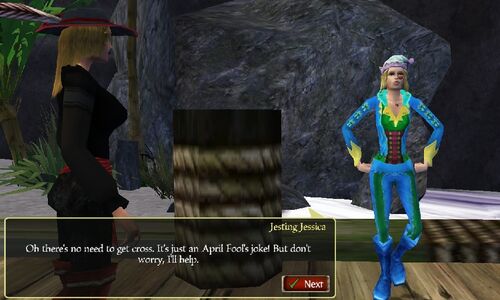 What's that on your face? You don't look so good, mate. Want to fix it? Visit Olivier on the docks of Padres del Fuego for a quest. But be warned, it's quite long, and very very difficult.

Keeping in the silly spirit of April Fool's Day, all pirates awake to find big fluffy mustaches on their faces! How did they get there? And how do you get rid of it!? This quest is given out by Olivier on the docks on Padres del Fuego during the April Fool's Day holiday in April.

As a reward, the pirate will receive 500 notoriety points and a special item upon finishing the quest.

Jessica laughs and explains that she's actually unable to undo the magical prank, but that it will wear off by the end of the day. She then fashions a Fake Mustache from the Undead Gravedigger's hair, which she gives to the pirate as a gift.

Retrieved from "https://piratesonline.fandom.com/wiki/Holiday:_A_Fool%27s_Facial_Hair?oldid=339007"
Community content is available under CC-BY-SA unless otherwise noted.