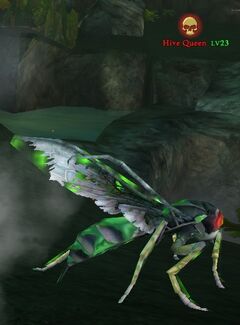 Hive Queen is the ruler of the Queen's Nest on Isla Perdida. This beautiful creature can be very dangerous, appearing up to Level 25 and her sting can defeat lower level pirates quickly and easily. The Hive Queen is always near soldier wasps to guard her, and reappears in the same spot every time.

She is assumed to be the Queen of all wasps in the Caribbean. She lives deep in the hive, and surrounded by her warriors. It is unknown whether she actually serves Jolly Roger, or is working for her own goals, whatever they may be.

Defeating her is the last thing a pirate will do to convince Scary Mary to rejoin the Black Pearl's crew, of course after having to fight several of her soldiers first.

Note: Hive Queen will always respawn in the same location. 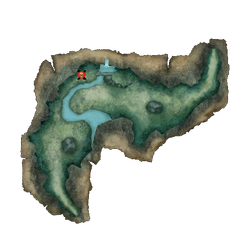 Retrieved from "https://piratesonline.fandom.com/wiki/Hive_Queen?oldid=324121"
Community content is available under CC-BY-SA unless otherwise noted.