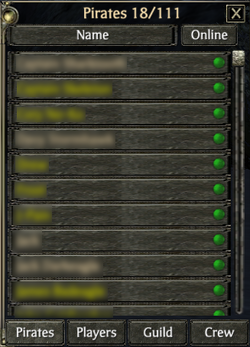 The phrase me hearties is common in pirate lore, mostly it means partners or mates (as in good fellows), those close to your heart.

In Pirates of the Caribbean Online, a hearty is a:

and it is also the name of the Sea Chest option of a pirate's current allies.

To access the Hearties menu, click on the Sea Chest (or press Tab) — then select the Mug Icon or press 'F'.

A list of pirates the player has made connections with will be displayed. The buttons below for the Friends, Crew and Guild lists which displays list of characters they are connected with as part of a guild or made friends with. The current Crew will display on the left half of the screen.

If a pirate is online, their name will be bright and have a green light on. Pirates offline, will be grayed out and have a red light.

Another option you may see below is Nearby. This displays ALL pirates in the immediate radius of the pirate who are not necessarily Crew, Guildmates or Friends. But this option is very convenient for trying to communicate or locate a specific pirate in a large group.

To interact with another pirate from your Hearties list, just click on their name in the list. Some options are available whether the player is online or not.

Note: If you are in a crew, only the creator of the crew can invite. Also, if the other pirate is already in another crew—you cannot invite them until they drop out.

Note: If the pirate is already in a Guild—you cannot invite them into yours.

Note: You can't do this if the pirate is in your own crew.

Retrieved from "https://piratesonline.fandom.com/wiki/Hearties?oldid=331961"
Community content is available under CC-BY-SA unless otherwise noted.