Health is the vital stat for life points used by a pirate and their enemies. When a pirate is attacked, this value is reduced. After the value reaches '0', a pirate falls unconscious. They must either have another pirate Revive them, or awaken in jail. When an enemy's health reaches '0', they die and disappear. Health can be found on the Vitals Key.

Any direct attack on the pirate by an enemy may result in lost of health points. But poison attacks, fire, and voodoo may have a lingering effect that continues to lower the pirates health even after the direct attack has ended.

In PvP the pirate can be injured by other pirates.

The pirate can also injure themselves, either by inadvertently dropping a grenade too close or by using the Desolation hex with their Voodoo Staff, which causes harm to the caster as well as the victims. 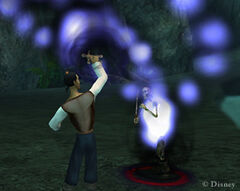 Pirates regenerate health automatically over time. Merely avoiding further damage, they will heal naturally. However, having the Determination skill increases the recovery rate.

A pirate can imbibe health tonics, purchased from a gypsy or eat food to quickly restore health and voodoo points. Press T to consume a tonic or eat food from your inventory. Players can now also drink potions.

Some non-player characters (NPC) can heal a pirate at the cost of 5 gold. Simply approach a character (green dot on the compass) and press Shift. If they can heal the pirate, a Heal option will appear in their interactive menu.

Also, voodoo doll users can heal any pirate they attune with the Heal or Cure spells.

Lastly, a pirate using a voodoo doll can heal themselves with the Life Drain spell, which takes health from the enemy.

A pirate begins the game with 250 health points. Each time their Notoriety level increases or their skill level increases, their health goes up. Level 50 pirates can have health up to 3440 points!(Without help from an endurance boost)

Also, the Endurance skill increases the pirates overall health by 4% per level. Behemoth blade is a good weapon of choice to increase your health.

Usually, the enemies have more total health than a pirate the same level as the enemy. There is a formula for finding the enemy's total health.

This chart applies to normal enemies, not bosses.
The health formula for bosses is 500*LVL-1,250. This does not work for lower level bosses or bosses on Flagships.

Note- It should be noted that these HP totals are no longer the case as of a prior patch. While the formula above is used still, there is an addition. The total result(250+(x-3)100) now has been set so HP is equal to 2/3's of the totals prior to said patch.

Note- This doesn't apply to enemies lvl 4 and below.

Bosses have about 5 times more health than their regular counterparts! This is the formula for finding about the health amount of bosses.

Reverse the operations to find the lvl of the boss by the health. (Multiply=Divide, Subtract=Add)

Note- Neban the Silent and Remington the Vicious have twice the health for a boss the same lvl! Foulberto Smasho topples all bosses with a massive x10 boost to the HP that a lv. 50 boss would have if the formula above is followed.